Leveraging International Institutions to Address Casteism: The case of Ambedkar

Excerpt: Suraj Yengde on a lesser-known chapter of history and how activists can use global forums for social justice 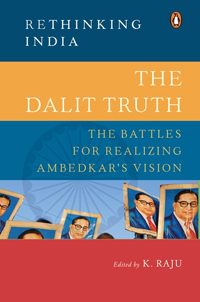 During this Dalit History month, on the birth anniversary of Dr B.R. Ambedkar, Penguin Random House is releasing ‘The Dalit Truth’, a symphony of Dalit voices as they call out to the future.

The multitude of Dalit truths and their battles against the lies perpetrated by the caste system are reflected in the pages of this book. It points towards a future filled with promises and prospects for the coming generations.

The book, edited by K. Raju, national coordinator for the SC, ST, OBC, and minorities cells of the Indian National Congress, is being published as the eighth volume in the Rethinking India series, published in collaboration with the Samrudhha Bharat Foundation. The authors featured in the volume come from various fields of social existence and bring narratives of different colors – not just stories of dismay but those of possibilities. The essays offer deep insights into social, educational, economic, and cultural challenges and opportunities faced by the Dalits, the varied strategies of political parties for their mobilization, and the choices to be made by Dalits for realizing equality.

The volume features expert views by authors such as Sukhdeo Thorat and Badri Narayan to Bhanwar Meghwanshi and from young thinkers and activists Jignesh Mevani and Suraj Yengde. It analyses the current Dalit status, economically, socially, and politically, the relevance of Ambedkar, and the new path of empowerment to be forged.

B.R. Ambedkar, on the contrary, was committed to making caste an issue of international concern. He saw this as the only way to get required justice for the Dalit community, which was put on the receiving end by the Indian National Congress and Jinnah’s Muslim League. Up to the Lahore Resolution, the Dalits were confident that a minority alliance between the Dalits and Muslims would help both the groups to fight in the Hindu-majority country. However, after the Lahore Resolution, this partnership was out of the question and thus, Ambedkar started actively seeking international alliances.

Pursuant to this, Ambedkar ensured that he took in confidence the British political class and general public that was invested in India. His 1946 trip to England, to advocate for international relief for the Dalits, has been analysed by Jesús Cháirez-Garza in his paper ‘B.R. Ambedkar, Partition and the Internationalization of Untouchability, 1939–47’. Cháirez-Garza argues that after his failure to secure rights from the imperial government, Ambedkar embarked to meet with the leaders of the British parliament.

Prominent among them was the Conservative Party leader Winston Churchill. Ambedkar also made representations to the leadership of various political parties and MPs from the Labour Party, Conservative Party and the Fabians. Ambedkar’s diplomatic move to garner international support was stopped by the influence of M.K. Gandhi, who preferred to not ‘negotiate’ with Ambedkar for fear of losing on ‘both fronts’. For Ambedkar, the call of the Indian nationalists for self-determination—‘Swaraj’—while defying the purpose of minority rights protection, was betrayal and unbecoming of a nation state.

Thus, he chose to approach the UN after his failure to receive adequate support from the Opposition and the government. This time, Vallabhbhai Patel, along with other Congress leaders, approached Ambedkar to negotiate. Gandhi continued to distrust Ambedkar’s efforts. In a reply to a letter by Carl Heath, a member of the Indian Conciliation Group who was an ardent follower of Gandhi, the latter did not exhibit sympathy to Ambedkar’s cause of internationalizing the struggle of the untouchables. Referring to Ambedkar, Gandhi added, ‘with men like him the end justifies the means’, and he refused to meet or entertain Ambedkar’s pressing demands.

The cause of Ambedkar was, however, echoed by Churchill and Jan Smuts, prime minister of South Africa, at international meetings and the United Nations. Smuts used the issue of untouchability to silence the hypocritical Indian government delegation led by Maharaj Singh, former governor of Bombay, who pressed for the rights of Indians in South Africa at the UN. Both Churchill and Smuts, colonial warlords, used untouchability for their own politics. The untouchables, however, remained the suppressed subjects, in spite of their sound political presence.

Ambedkar got a seat in Nehru’s first cabinet as a law minister but was not given the important portfolios he had hoped for. In his resignation letter, Ambedkar elucidated various reasons for his exit. He was tokenized in the administration without having been given any substantive powers.

Ambedkar had not taken the case of the untouchables to the UN in 1947. His reasoning was premised on trusting the Constituent Assembly and the future Parliament of India, which he hoped would accord required rights to the untouchables. He was wrong, and thus his bitterness grew towards the ruling dispensation.

Ambedkar also perhaps did not pursue the UN route aggressively, because he was hoping to get into the Constituent Assembly so he could channel the Constitution towards this goal. However, provisions made in the Constitution for the scheduled castes did not impress him. He bluntly stated in the resignation letter that:

. . . the provisions made in the Constitution for safeguarding the position of the Scheduled Castes were not to my satisfaction. However, I accepted them for what they were worth, hoping that the Government will show some determination to make them effective. What is the position of the Scheduled Castes today? So far as I see, it is the same as before. The same old tyranny, the same old oppression, the same old discrimination which existed before, exists now, and perhaps in a worst form.

This was a damning self-indictment of the leader of the scheduled castes who had hoped to secure their future in a Brahmin–Baniya-ruled independent India. Getting Ambedkar into the Constituent Assembly worked mutually for Ambedkar and the Congress party. However, the causes Ambedkar espoused were subdued and could not see the light. The internationalization of the Dalit cause and the intervention of the UN on the caste issue would have been an embarrassment for India. Perhaps there was some unwritten, silent agreement between the
Congress and Ambedkar when he threatened to take India to the UN, which would work in delegitimizing the leadership of dominant caste Hindus in a recently independent nation. And this would also mean taking down the third-world, coloured people’s internationalism that Nehru wanted to champion.

These questions remain with us, but the indifference of the UN towards the issue of caste continues.

[The excerpt reproduced with permission of the publishers.]