Does India have an effective family planning strategy?

India is the second most populated country in the world and harbours 17.5% of the world’s population “If we don’t halt population growth with justice and compassion, it will be done for us by nature, brutally and without pity - and will leave a ravaged world.” – Nobel Laureate D. Henry W Kendall.

Even as this article is written, the Worldometer is recording the 7,634,809,650th birth in this world.  31 years ago on this day the world population touched 5 billion and alarmed the world. Taking a cue, the Governing Council of United Nations Development Programme recognised July 11 as “World Population Day” every year since 1989. This day is an annual reminder for the world around to take note of the population status and its ramifications.  The designated day plays an important role to create awareness about issues related to population like family planning, reproductive health, gender equality, maternal and child health, women empowerment, human rights, sex education, contraceptives and others among the general public.

This year, 2018 marks the 50th anniversary of the International Conference on Human Rights where representatives of 84 member states adopted the Proclamation of Teheran. For the first time, the basic right of parents “to determine freely and responsibly the number and the spacing of their children” (para. 16) was affirmed in a global agreement in 1968.  This year the theme is “Family Planning is a Human Right”. Globally, family planning is understood to be the best prescription for decreasing maternal and infant mortality and morbidity, improving the overall health of women and children, ending poverty, building more secure and prosperous societies ensuring wider social and economic development.
Tolerating rights violations in family planning programmes is as good as killing the programme and wasting money. Early population control programmes have cast a negative reputation due to violations of human rights.  At the same time, strengthening principles of human rights in these programmes can be the best solution to fight coercive FP policies and practices. The United Nations Population Fund (UNFPA) and the World Health Organization has recognised nine standards that must be met to realise family planning as a universally available choice in every community and for every individual. The nine standards to uphold the human right to family planning programmes are non-discrimination in providing the services; availability; accessibility; acceptability; good quality; informed decision-making; privacy and confidentiality; participation; and accountability of services.
Indian scenario
India being the second most populated country in the world and harbouring 17.5% of the world’s population, the progressive attitude also shows that we were the first country to have launched a Family Planning Programme back in 1952. India is now the signatory for important treaties to achieve Global Agenda for sustainable development. This includes signing up with 169 other countries working to achieve the targets under that Sustainable Development Goal 3 (SDG 3) that calls for reducing global maternal mortality ratio and ensuring universal access to sexual and reproductive health-care services by 2030.

Targets under SDG 3: Ensure healthy lives and promote well-being for all at all ages

The 2012 ‘London Summit on Family Planning’ has been the major push for revolutionising the national agenda for India and for the global vision of protecting children and mothers dying due to unhealthy spacing of births and lack of access to family planning choices. Vision FP2020 (Family Planning 2020) charts out India’s global commitments made in this summit with 59 other developing countries.
India’s overarching goals for FP2020 aims at increasing the modern contraceptive usage (mCPR) from 53.1% to 54.3% and to ensure 74% of demand for modern contraceptive is satisfied by 2020. List of commitments have been rolled out to achieve these goals.  The mCPR in India for 2018 by the TRACK20 report is estimated to be 0.6% higher, i.e 54.1% than the 2017 estimate of 53.5%.  NFHS-4 (2015-16) show that the onus of family planning still largely lies on women with 75.3% of women undergoing sterilization compared to other modern methods adopted. Activities planned for the coming years need to focus on larger update of contraception methods by men. 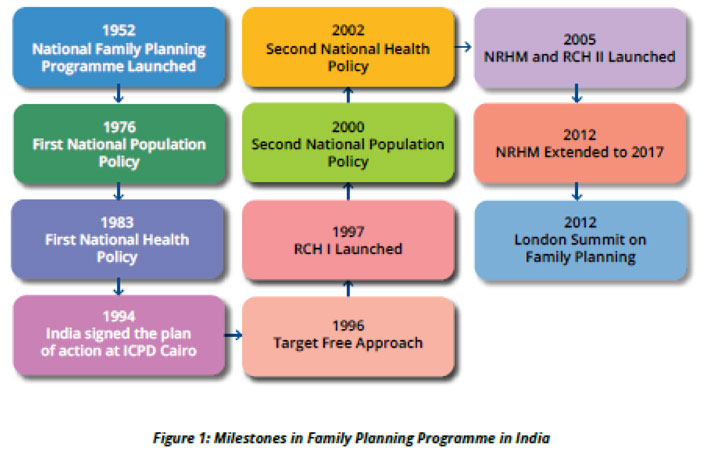 We have come a long way and evolved from what was a population control centric approach to a reproductive right’s based approach in the last 50 years. National priority of emphasising on sterilisation as a contraceptive provision has now moved to focusing more on spacing services.
Revisiting and questioning the theme for this year keeping the above journey in the background, how does one ensure voluntary family planning programs to result in contraceptive use based on full, free and informed choice?
Having said all this, there is also a need to recognise that no family planning programme is 100% effective till the socioeconomic or political circumstances are addressed through awareness by government as well as community initiatives.
Nagendra is Programme Officer with Public Affairs Centre, a not for profit think tank committed to good governance