Ganga needs water not scores of clean up plans Spiritually she is limitless and most holy. But in physical form the river Ganga is just a sewage canal, filthy and unhealthy even for a dip.

Almost three decades and clean up plans of thousands of crores, the mighty Ganga remains lifeless and bears the burden of the lifeless bodies.

In his maiden financial budget, finance minister Arun Jaitley announced another Rs 2037 crore for cleaning up and rejuvenation of the river. The first plan for cleaning the river was unveiled in 1986. The central government has claimed to clean-up the Ganga by 2018.

According to Prof BD Tripathi, river scientist in Banaras Hindu University (BHU), the major problem faced by the river is lack of flow. “The river needs water. Year-after-year it is shrinking into a pond. Due to dams and channels built over the river mostly in Uttarakhand, there is a negligible flow in the river in the plains and that is the area where the river gets polluted,” said Tripathi, a member of national Ganga river basin authority (NGRBA), while talking to Governance Now. 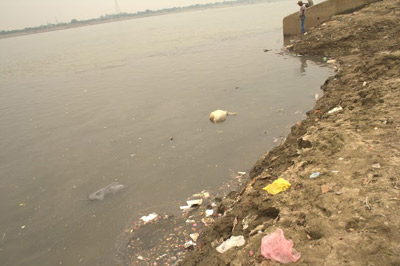 According to him, the river has its own purification science but it cannot be achieved with reduced flow in the river. “The major issue is its undisrupted flow which is yet to be discussed. All the claims and planning are on the paper at present. We cannot see any ground level work as of now,” he said talking about government’s rejuvenation plan, which was a major poll issue during 2014 general elections.

According to a study conducted by Ganga Lab and River Ecosystem Environment Management and Training Centre in BHU, due to dams and channels, less than 1 per cent of the original Ganga water reaches in the holy city of Varanasi where lakhs of pilgrims take bath in the river every day.

According to South Asia Network of Dams, Rivers and People, there are 26 existing hydroelectric power projects on Alaknanda, Bhagirathi and Ganga river basin (confluence of Alaknanda and Bhagirathi) which generate 2480.05 MW of power. Apart from these dams there are 41dams under construction while 96 dams have been on drawing boards.

The 2500 km Ganga basin nourishes 450 million people in five states and its waters are exploited for various domestic, industrial and religious requirements.

A grave problem faced by the river and people depending on it is of floating bodies. Early this week, over 50 bodies were found floating on the river in Unnao district of Uttar Pradesh. 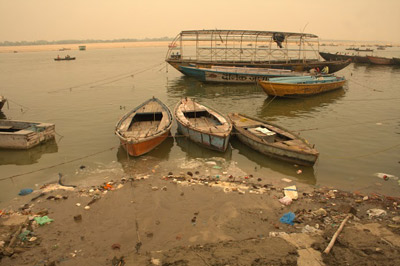 According to a boatman in Varanasi, Vinod Manjhi, out of hundreds of bodies brought to the city for performing cremation on daily basis, 50 to 60 bodies are not cremated on funeral pyre but immersed in the river.

“This happens when a person dies with skin disease, snake bite or during pregnancy. There is no proper mechanism for such cremation and the body is immersed as it is in the river”, he says.

Besides, there are excess like municipal sewage and industrial effluents. The issue of industrial pollution into the river has already been handed over to the Green Tribunal and it has been asked to submit its report every six months.