Greenpeace activist slams the ‘double standards’ shown by the government Singruali: Forest rights activists protesting the passing of `forged` gram sabha solution and arrest of an activist, in 2004.

The governments in India have shown remarkable inability to balance development and dissent. Procedural and bureaucratic delays are condoned without much ado but hurdles due to civil society’s opposition are crushed with iron hand.

The concept of development is supreme in the current economic discourse and the Modi government has made no exceptions. It is in fact aggressive in its development agenda with ‘Make in India’ as its core concept. The very agenda of development, with which Modi achieved a massive victory in the 2014 general elections, rules the psyche of the government now. The centre has made its stance clear that it would no longer tolerate any hindrance, rational or otherwise, in the PM’s dream project.

The recent incident of Priya Pillai is an example of the government outlook towards citizens with a tag. On January 11, Pillai was to give a presentation to the ‘All Party Parliamentarian Group’ (APPG) on Indo-Britain relations and tribal affairs about alleged human rights violations of the tribal community by Essar Power (a company registered in the UK) in the Mahan coal block area of Singrauli district, Madhya Pradesh.

Pillai, a campaigner with Greenpeace India (an NGO working on issues related to environment), was offloaded from a London flight by immigration officials at Delhi airport. After a number of checks on Pillai’s antecedents she was told by officials that she could not go abroad. Unable to get a clear reason from the home ministry on her travel restrictions, Pillai finally approached the Delhi high court.

This is not a one-off incident of the government’s high-handedness in curtailing liberty of citizens and civil society. The bias was apparent in the intelligence bureau (IB) report of last year, which accused a few foreign funded NGOs, particularly Greenpeace, of being involved in motivated campaigns that reflected in decreasing economic growth of India.

Pillai, however, slams the “double standards” and argues, “The government can approve foreign direct investment (FDI) and agree to conditions laid down by stakeholders for making profits, but is quick to object to an NGO wanting to act in the interest of the downtrodden.”

Greenpeace is of the view that the government has blown the issue out of proportion in the name of national economic security. “There is false information in the affidavit filed by the government in court. The members of the APPG have no decision-making powers in parliament. We only wanted to apprise the members of the violations made on the tribal community by a firm that is registered in their country,” says

Divya Raghunandan, programme director, Greenpeace India.
In the court, the government reiterated that national economic security was of utmost importance as India was way behind many developed countries.

The current tug of war between the government and foreign-funded NGOs has, however, been more strenuous for the latter. “Since the leak of the IB report, there has been a series of false charges on Greenpeace in the media, which the government then used to legitimise its actions against the organisation,” says Raghunandan.

What Priya Pillai has to say 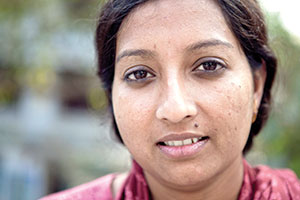 Scene at the airport

I reached the Delhi airport at 3.30 am to board a flight scheduled to leave at 6.30 am to London. I received my boarding pass but the moment I reached the checkpoint, I was asked to wait by immigration officials. My passport kept rotating from one official to another. It was a bit embarrassing as people were waiting behind me in a queue and giving me the “what happened with her” and “why is she not moving forward” looks. I kept asking the immigration officials if there was a problem but no direct answer was given to me. Finally, a senior official told me that I could not go out of the country. When I asked for the reason, I was told that government orders were being followed. I left the airport thereafter.

Knocking on the court’s door

After I was prevented from travelling abroad, I wrote to the ministry of home affairs a number of times seeking an explanation. Unable to get any clear reply, I filed a writ petition in the Delhi high court stating that my constitutional rights were being violated.

What she wants to highlight

Gross human rights violations are taking place in Mahan. In order to convert the forest into non-forest land, there are certain rules and guidelines that need to be followed under the Forest Rights Act. In order to pave a way for stage II forest clearances, a gram sabha in Amelia village, Mahan, adopted a false resolution. The signatures of many villagers were forged, with some of them even in the name of those who are dead. Moreover, the gram sabha was supposed to be formed in all 54 villages of the area, and not just in one village.

Purpose of the London visit

Essar Power is part of a joint venture – Mahan Coal Limited – that was allocated the coal block in Mahan, before it was de-allocated by the supreme court in September 2014. The company is registered in the UK. We wanted to speak to the ‘all party parliamentarian group’ (APPG) on Indo-Britain relations and tribal affairs to apprise them of Essar and its activities that are leading to human rights violations of the tribal community in India. Though APPG members have no legislative powers in parliament, still we were of the view that as the company is registered in the UK, the APPG could demand accountability from it.

The government questions the motive behind receiving funds from foreign institutions by NGOs. What about FDI? The government is ready to be subjected to conditions put down by foreign corporate houses in FDI, the sole purpose of which is to make profit. But when it comes to funds coming for NGOs from abroad, the government is quick to object. Yes, our politics is anti-nuclear and anti-GM crops, but at least we do not get suppressed by any conditions. This is the sole reason why Greenpeace does not accept money from corporate houses.

The idea of development