The new train is also seen as a success story of the NDA government’s ‘Make in India’ initiative, as its major systems have been designed and built indigenously. Impact of this train, matching global standards of performance, safety and passenger comfort and yet costing less than half of global prices, has the potential to be a game changer in the global rail business, an official statement said.

The PM flagged off the maiden run of the train after inspecting the facilities in the train and addressed a gathering on this occasion. Railways minister Piyush Goyal is leading a team of officials and media persons aboard the train on its inaugural run. It will stop at Kanpur and Allahabad where it will be received by dignitaries and the people.

Modi said the government had worked hard to improve the railways infrastructure and Vande Bharat Express was a testimony of this hard work. He congratulated the Indian railways for being one of organisations that pioneered the Make in India initiative. Rail coach factories were being modernised and diesel engines are being converted into electric ones.

The train left at 11.19 am for Varanasi and was expected to reach the destination within 8 hours.

Thousands of curious people had lined up along the tracks, clicking photographs and making videos as the train passed through stations like Shivaji Bridge in Delhi, Ghaziabad junction and Tundala Junction near the national capital. As the train passed villages, people were seen forming a human chain along the tracks to have a glimpse of India's first semi high-speed train.

Over 500 people including journalists, railway officials and other staff were travelling on the train with heavy security arrangements put in place.

One has to shell out Rs 1,760 for chair car seat and around Rs 3,310 for executive class seat for travelling between New Delhi and Varanasi.

Girish Pillai, member traffic, railway board, said the train set is a different technology which doesn’t have a locomotive. He said the railways have registered 100 percent booking for the first commercial inaugural run of Vande Bharat express on February 17.

He said acceleration and deaccaleration is different and better in this train compared to conventional ones. He said Vande Bharat would be taking around eight hours to reach Varanasi from New Delhi against 14 hours taken by other trains. 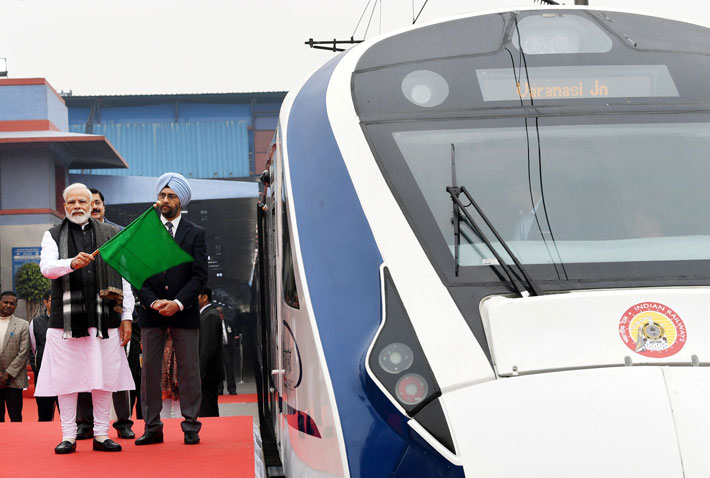 He said fare is carefully decided for the passengers and is lesser than the Gatiman express. He also said the fare is 1.4 time of the fare of chair car of Shatabdi. He said the Delhi-Varanasi route is the best one and a maximum number of Rajdhani trains run on this section. This is a busy route and that is why it was chosen for the Vande Bharat Express.

Pillai said fencing will be done only in the vulnerable routes where the train passes through dense towns.

Vande Bharat Express can run up to a maximum speed of 160 kmph and has travel classes like Shatabdi train but with better facilities. It aims to provide a totally new travel experience to passengers. The train will cover the distance between New Delhi and Varanasi in 8 hours and will run on all days except Mondays and Thursdays.

All coaches are equipped with automatic doors, GPS-based audio-visual passenger information system, on-board hotspot Wi-Fi for entertainment purposes, and very comfortable seating. All toilets are bio-vacuum type. The lighting is dual mode – diffused for general illumination and personal – for every seat. Every coach has a pantry with facility to serve hot meals, hot and cold beverages. The insulation is meant to keep heat and noise to very low levels for additional passenger comfort.

Vande Bharat Express has 16 air-conditioned coaches of which 2 are executive class coaches. The total seating capacity is 1,128 passengers. It is much more than the conventional Shatabdi rake of equal number of coaches, thanks to shifting of all electric equipment below the coaches and seats in the driving coach also.

Adding up the green footprints, the train has regenerative braking system in the Vande Bharat Express coaches which can save up to 30% of electrical energy.

Speed, Safety and Service are the hallmarks of this train. Integral Coach Factory (ICF), Chennai, a Railways Production unit, has been the force behind a completely in-house design and manufacture, computer modelling and working with a large number of suppliers for system integration in just 18 months.