As per a RTI reply, the money was spent on tent arrangement, waterproof pandal, electrical, signal and telecommunications purpose In an RTI reply to this reporter, the northern railway has revealed that Rs 52,18,400 were spent by the railways for the inaugural run of Vande Bharat express from New Delhi to Varanasi. The money was spent for tent arrangement, waterproof pandal, electrical, signal and telecommunications purpose.
After being flagged off from New Delhi, Train 18 stopped at Kanpur and Allahabad where it was received by senior BJP leaders.
The railways, however, failed to provide the number of scribes travelled in the first ever run of Vande Bharat express on February 15. The railways’ written reply states: “due to inaugural run of train number 22436 dated February 15, 2019 no passenger booking was allowed for general public in the train.” 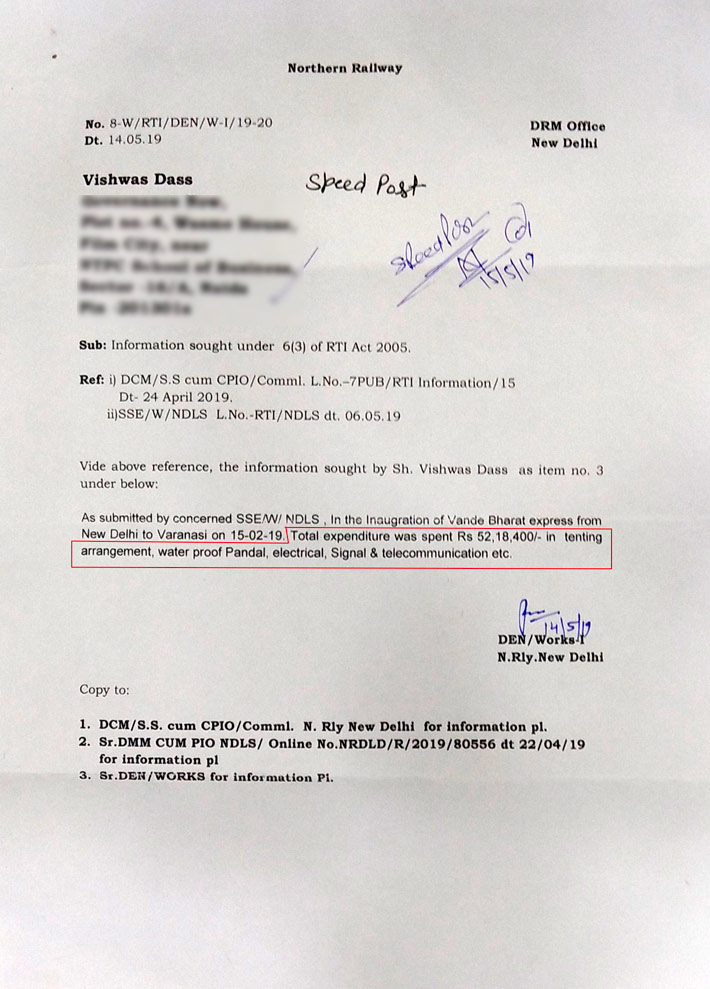 Many key ministers like railways minister Piyush Goyal, BJP veteran Murli Manohar Joshi and Rita Bahuguna Joshi travelled in the train, which has been touted as India’s first semi-high speed train that can run at 160 kmph. However, the train ran at a maximum speed of 130 kmph on its inaugural run as the route was not yet fenced to prevent trespassing.
Hailing the Vande Bharat express, PM Modi has said that train is a success story of NDA government’s ‘Make in India’ initiative as its major systems have been designed and built indigenously. Impact of this train, matching global standards of performance, safety and passenger comfort and yet costing less than half of global prices, has the potential to be a game changer in the global rail business, an official statement said.
Ticket for a chair car seat in Train 18 costs Rs 1,760, while Rs 3,310 for executive class seat.
Vande Bharat Express has 16 AC coaches of which two are executive class coaches. The total seating capacity is 1,128 passengers. It is much more than the conventional Shatabdi rake of equal number of coaches, thanks to shifting of all electric equipment below the coaches and seats in the driving coach.