Sasikala posters come up in Chennai, want her as AIADMK chief Supporters of Sasikala, late chief minister J Jayalalithaa’s aide, have put up posters across the Tamil Nadu capital to demand that she take over the reins of the AIADMK. There are a few posters too in support of Jayalithaa’s niece Deepa Jayakumar.

Jayalalithaa died on December 5 and hours later O Panneerselvam was sworn in as the chief minister. She had strained ties with her brother and his family, so much so that Deepa was not allowed to meet her when Jayalalithaa was in hospital.
There are strong indications that the next general secretary of the AIADMK could well be Sasikala. In some posters, Sasikala  has even overshadowed the image of Jayalalithaa. 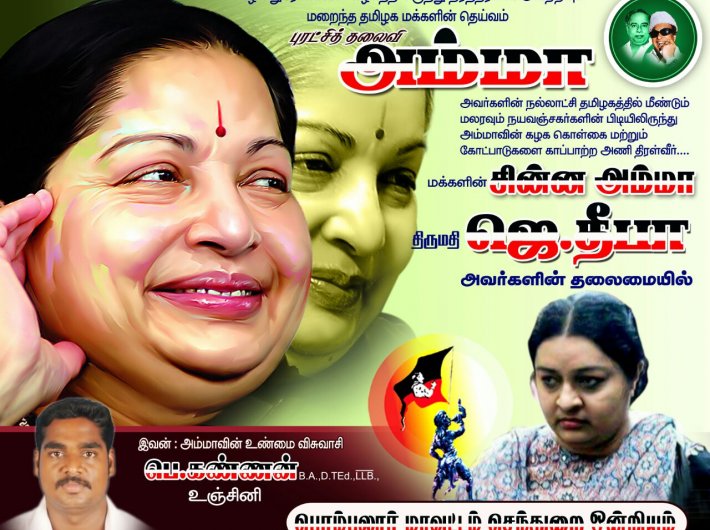 AIADMK’s presidium chairman E Madhusudhanan told Governance Now, “It is Chinna Amma (as Sasikala is addressed) who would lead the party as she had been with Amma (as Jayalalithaa was popularly known) for 33 years and she knows the way of working of Amma.”
Sasikala has received support from many leaders including chief minister O Panneerselvam. Media reports cited a statement from Panneerselvam: “Sasikala had grasped the line of thought and way of functioning of Jayalalithaa during the past 33 years. Just like Jayalalithaa knew the grassroot-level cadre, Sasikala too knows them well. If the AIADMK is to continue as a movement with military discipline, the only way out is Sasikala taking over as the general secretary and leading the party. There is no differing view in the party on this. If anyone expresses any contradictory view, that person is not a cadre of this party.”
It is expected that general body meeting of AIADMK would be held before December 30 to formalize  Sasikala as party general secretary.