Steaming up an oldie

Work is on at full swing to restore Ramgotty, the second oldest steam locomotive at a diesel shed in Delhi Ramgotty, India’s second oldest steam engine, will soon be reliving its glorious past. The 157-year-old engine is being restored at the northern railway’s Shakurbasti diesel shed in Delhi. Indian Railways, which has prided itself on its heritage machines, hopes to attract domestic and international tourists with the new exhibit.

“Nothing rekindles love for the railways more than steam locomotives. At the rail museum, we endeavour to bring to life more and more steam locos for tourists to experience. The Patiala State Monorail Trainways (PSMT) monorail, Ramgotty, Phoenix and Fireless are steps in this direction,” says National Rail Museum (NRM) director Amit Saurastri.
The Ramgotty story goes back to 1863, when a private firm called the Indian Branch Railway Company, opened the 27 km line from Nalhati to Azimganj, both places in present-day West Bengal. The track was four feet wide but later widened to five and a half feet (broad gauge). It was actually laid on the public road between the two places. This was one of the many feeder lines being laid to connect with major railway stations as the British, after the 1857 uprising, decided to connect India with railway and telegraph lines. The railways would serve both to extract and transport natural resources as well as move troops to keep the land subjugated, while the telegraph would hasten communication, again easing administration and control. 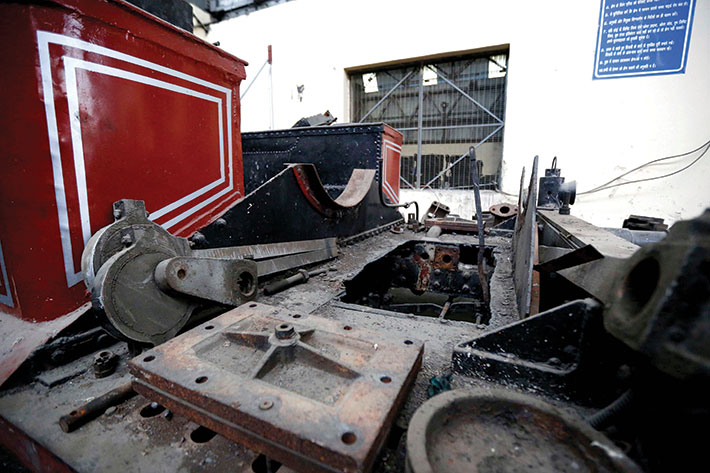 Coming back to the Ramgotty, the 20-tonne red-and-black engine was built by Anjubault in Paris in 1862, the year before the branch railway firm began operations. The gauge conversion story began after the Nalhati-Azimgunj Light Railway was taken over by the East Indian Railway (EIR) in 1892 and re-gauged to broad gauge line. Ramgotty too was consequently re-gauged to broad gauge, and became a shunting engine at the Jamalpur Workshop, till it was sold in 1951 to the Calcutta Corporation Municipal Railways for refuse train work, that is, to pull wagons laden with garbage.
The engine was consigned to the scrap heap in her centenary year, but luckily, in 1974, was rescued, and returned to the Jamalpur Workshop, before being retired to the National Rail Museum, in 1980. It might be mentioned here that the engine is named after Ramgotty Mukherjee, the last general manager of the Nalhati-Azimgunj Light Railway.
A handful of experts with deep technical knowledge about heritage steam locomotives have been assigned to revive the engine. It was dismantled and brought to the Northern Railway’s Shakurbasti diesel shed in December last year on a huge trailer to give it a new lease of life. In various states of repair around it are modern diesel locomotives, most of them 20-30 years old. They may just need some repair or upkeep, but Ramgotty will need complete refurbishment. It could take more than a few months before the engine is fully restored. 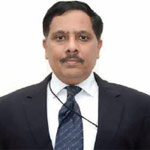 “Railways is more than just transportation”

Indian Railways is passionately reviving its old steam engines for the future generations, who can relish these locomotives which used to run 150 years ago. Ramgotty was India’s first and only locomotive which was converted from a four feet gauge to 5’6’’ broad gauge. When it was a four feet gauge engine, it remained operational for a short time only. It was the first gauge conversion project of the Indian Railways in the British era. We also want to give a boost to tourism so that people from all walks of life can experience the majestic beauty and rich cultural history of Ramgotty once it is back to the NRM.

Not only Ramgotty but British era locos like Pheonix and Fireless are icons of the bygone era. They certainly exemplify power. The logo of Indian Railways is also a steam engine which has its own kind of inspiration. The steam locomotives are still causing excitement across the globe. Recently, the US has also fired the world’s largest steam loco, the Big Boy, in April 2019. Even in Switzerland, the railways take steam engines on the mainline. Indian Railways is more than just social and transport organisation and it also exemplify cultural values because it has shaped society over the last 150 years, including freedom movement and unification of the country. By keeping these steam engines, we are trying to preserve our cultural heritage. This entire exercise of reviving engines inspires posterity. They should not be deprived of what we have enjoyed in our lifetime. The railways is looking at heritage, culture and tourism aspects.

The engine’s boiler, which is the most important component, has been taken out for a thorough repair. “All subsystems, air compressors, steam-powered generators, wheels and axle, water and coal tenders, among many other components, will be tested, repaired and restored,” says a diesel shed staffer.
Other than the boiler, the firebox, steam cylinder, steam power assembly, associated coupling rods, wheel and axle, brake system, water and coal tender, headlights, marker lights, transition coupling, buffer, buffer plates and various types of steam valves – each of these will be checked and repaired or restored.
The revival will need detailed execution, says an employee at the workshop. He says, in fact, reviving Ramgotty is proving more complex and challenging than reviving the Fairy Queen, the 1855-made engine that is the oldest in the world. He says only a few components of the latter had to be replaced. But with Ramgotty, some parts are totally missing. They will have to be remade. Ashwani Lohani, former chairman of the railway board hogged limelight for undertaking the restoration of the Fairy Queen steam engine in 1997, when he was the NRM director.
An official said that since the project is of huge importance to the railways, senior experts who used to deal in steam engine restoration have been approached for manufacturing the needed components. He said Indian Railways had stopped using steam engines in 1995, when diesel engines were pressed into service. A few years later, high grade electric engines were introduced to haul key trains like Shatabdi and Rajdhani. At that time, there were a few steam engine parts manufacturers/vendors but soon they also switched to selling and developing diesel and electric engine spares. This posed a lot of problems in procuring steam engine components. 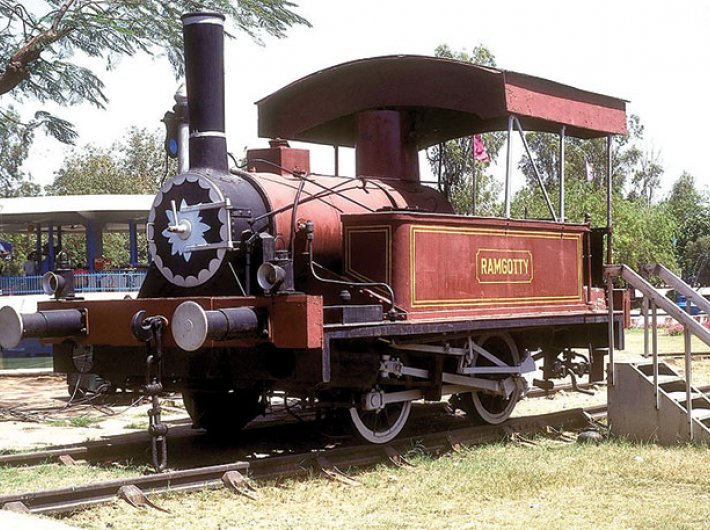 The official said that since it is a very old locomotive, the railways do not have any drawings and part numbers available with them because of which there is a need of reverse engineering. He said that experts at the Kalka workshop have been consulted to find out which old parts can be replaced or repaired or have to be built once again.
A team of mechanical engineers is working on to repair or change the rusted iron sheets of the main body of the locomotive. If the tubes fitted inside the boiler are dysfunctional, they would be replaced but the main external body of the boiler would largely remain the same. It might be noted that the boiler of the Ramgotty is bigger than that of the Fairy Queen. After thorough inspection at the museum itself, after confirmation that the boiler could be repaired at the Shakurbasti shed, the loco was moved there. The undercarriage and “bullhead” too need to be built again. Since the engine is over 150 years old, a majority of parts have been corroded. Such parts would be customised and manufactured by the railways’ vendors.
One of the curious railway staff pointed to buffer plates of the engine’s main body on which its date of manufacturing was engraved as 1963. He said, “This buffer plate is of my age as I was born in 1963.” Though the engine was built in 1862, its buffer plates must have been replaced in 1963, he said. An official says Ramgotty would be ready by June, though it seems the restoration work may take many more months before it is finally dispatched to the NRM. The engine will most likely be driven back from Shakurbasti to the museum, since both are connected by a broad gauge line.
vishwas@governancenow.com
(This article appears in the June 15, 2019 edition)