A chemical attack, allegedly by the Syrian government, and the US missile attack on Shayrat air base. Countries react to the upturn in the conflict As the 59 American Tomahawk missiles lit up the dark skies, smashing Syria’s Shayrat air base near Homs, the collective conscience of the “civilised world” was assuaged. Some called it a “humanitarian act”. More bizarrely, MSNBC anchor Brian Williams had poetic ruminations as the footage of the missiles showering on the war-torn country was released. “We see these beautiful pictures at night from the decks of these two US navy vessels in the eastern Mediterranean,” Williams said. “I am guided by the beauty of our weapons,” he added, quoting Leonard Cohen.

The Syrian state news agency said that nine civilians, including four children, were killed.
What we know about the attack
The cruise missile strikes were ostensibly in response to an alleged chemical attack on April 4 in rebel-held Khan Sheikhoun town – according to Idlib’s opposition-run health authority it killed about 89 civilians and injured more than 300 people. Horrific images of children suffocating to death became viral on the internet. The US and the EU condemned the attack and quickly blamed the Syrian government for the tragedy.

The UN Commission of Inquiry has documented 14 instances of the use of chemical weapons by Syrian government forces between 2013 and 2017. These have been based on evidence from witnesses.
However, regarding the Khan Sheikhoun attack, Assad would be suicidal or officially insane to launch chemical weapons at this juncture of the Syrian war, when for the first time in the past six years, he clearly had an upper hand in the Syria peace talks inspite of powerful western countries desperate to see him go. Syria, with liberal help from Russia, has regained control of vast swathes of Syrian territory from Da’esh and the so-called “moderate” opposition fighters and other rebel groups and terrorists. The recent victory over Aleppo had decisively tilted the balance in favour of Assad.
Additionally, Russia has been in the driver’s seat dislodging the US, most conspicuously displayed in the recent Astana talks on Syria brokered by Russia, Iran and Turkey. For the first time, all major opposition groups, including the so-called High Negotiations Committee (HNC) and the Syrian government led by Bashar al-Jaafari, were in the same room.
The HNC is an umbrella group that constitutes the main opposition bloc to the Assad regime and was founded in Saudi Arabia in December 2015. Its chief negotiator was Mohammed Alloush, a hardened criminal and founder of Jaish al-Islam who resigned in May 2016 citing the lack of movement in Syrian talks. Alloush was the main opposition negotiator for the Astana talks which were said to be “complementary” to the UN peace talks in Geneva. UN special envoy for Syria, de Mistura, sent representatives for the talks but was not present himself.
“If one supposes this attack was to undermine the Astana process, the Geneva process and the Brussels conference, we must do all we can and we are doing it. All the pictures [of the alleged chemical attack] we have seen so far, are just sending the contrary message,” de Mistura said at Brussels. “You did not impress us, we are horrified, we are outraged but we are not going to feel this is a way to divert our attention from what we need to do about Syria,” he added.
The next round of peace talks in Geneva is scheduled for the first week of May. Though the talks did not result in much in the most recent round held in late February but, to use de Mistura’s words, at least nobody walked away. It is not uncommon for attacks and ceasefire violations to escalate prior to Syria peace talks but a chemical attack, if proven that it was indeed sarin or chlorine gas or both, is a first, possibly indicating either an attempt to show muscle power or the desperation of actors who do not like the way the Syria talks are unfolding.
No possibility in the war playbook can be dismissed straightaway.
At the risk of oversimplification, in Syria: the Russians are helping the Assad government, which now controls swathes of the western and south-western territory including Damascus, Daraya, Homs, Hama and Aleppo and Deir Az Zor. The north-west part is held by armed rebel groups who have been funded by the US, the UK, Saudi Arabia and other Gulf countries to fight the regime. ISIS or Da’esh occupies patchy territories in the east and the north including Palmyra and Raqqa. Most countries are fighting ISIS but there have been credible allegations that Saudi Arabia supports ISIS and Turks illegally buy oil from them. Turkish intelligence have covertly supported Al-Qaeda affiliates in northern Syria, including Idlib. Along with the CIA and other Gulf Arab allies, Turkey has armed extremist rebel groups to fight the Assad government. Turkey has long had expansionist ambitions to reclaim the Ottaman empire territories it lost in 1922. Kurdish forces, supported by the US to fight ISIS and opposed by the Turkish government, control the north. The Iran-supported Lebanese militia Hezbollah supports the Syrian government. Additionally, the Pentagon and CIA-backed rebels sometimes end up fighting each other, landing up bizarrely in opposing rival groups who fight the Syrian government. Once an army of people are armed and let loose, it is difficult to ascertain who is fighting whom.
Turkish president Recep Erdogan has called on the US president Donald Trump to revive the Syrian regime change agenda—something the American president was reluctant to pursue earlier. But Erdogan is not too enthusiastic about an independent inquiry into the alleged chemical attacks.
“Erdogan’s proactivism in real time has only one explanation – the chemical attack in Idlib was in reality planned with the knowledge of Turkish intelligence. Erdogan has everything to lose if this truth comes out,” writes M.K. Bhadrakumar, former Indian ambassador to Turkey, in his blog Indian Punchline.
“All three protagonists gained out of this cynical game – Erdogan, the “cold warriors” in the CIA and the Russophobes in the Washington establishment, and the beleagured American president himself,” Bhadrakumar adds.
All of the above-mentioned governments constitute what is called the International Syria Support Group, consisting of 20 states and international organisations, including the UN, who came together in Vienna in 2015 to come up with a solution for Syria’s political future.
It is bewildering then that many media outlets still choose to term the ongoing humanitarian disaster as the Syrian ‘civil war’.
What happens now?

Trump, displaying a rare instance of wisdom, had declared at the start of his presidency that it is up to the Syrians to decide who their president will be. After the alleged chemical attack, this has changed. Now the US and Russia have been trading warnings at the UN and through the media. 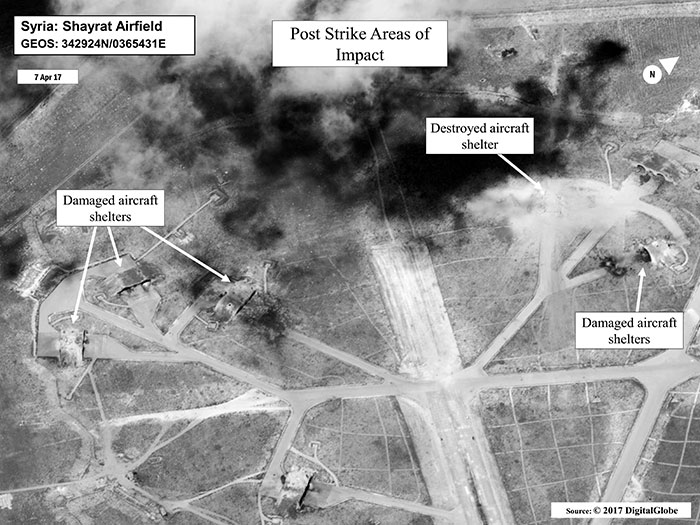 
Both Russia and Iran have threatened military retaliation against the US, accusing Trump of crossing “red lines” through the Syrian air base attack. America knows “our ability to respond well”, read a Russian statement. Reports suggest that Russia has shut down its hotline with the American military that it kept going to keep its aircrafts from colliding into each other in the Syrian airspace.

“If you gas a baby, if you put a barrel bomb into innocent people, you will see a response from this president,” White House press secretary Sean Spicer said on April 10.
Lavish praise has been showered on Donald Trump after the Shayrat air base bombing. The armed opposition groups have applauded the move and so have most western governments. A Pew Research Centre report shows that 58 percent of Americans approved of the US missile strikes against Syria in response to reported use of chemical weapons.
An op-ed article in the New York Times said that “they [the American missile attacks] have gone a long way to restoring our badly damaged credibility in the world”. Similar op-eds appeared in other prominent news outlets.
“The attacks send out a strategic message, that the US is unafraid to use force. Part of the audience is not just Russia, Iran and Syria. Part of the audience is president Xi,” said James Stavridis, a former US navy admiral and current dean of the Fletcher School of Law and Diplomacy.
If the attempt was to “restore” America’s credibility or scare Xi Jinping, one wonders the need for Haley to hold up the picture of bombed children at the UNSC.
Some analysts have argued that the American strikes came a little too soon after Devin Nunes, a Republican who was leading the Congressional investigation into Russian interference in the 2016 elections, stepped down owing to allegations of bias. Was this to distract attention, they have asked.
Whatever be the intention of the strike, Trump is unlikely to forget what got him this kind of unprecedented praise from an otherwise aggressive domestic media.
Infighting among the governments involved will only create breathing space for ISIS to resuscitate which is otherwise being choked out of many Syrian territories. This is bad news for the world.
The sole clear beneficiaries of current volatile situation have been defence contractors. War stocks have rallied after the US and Russia clashed. Raytheon Company, the maker of the Tomahawk missiles, and Lockheed Martin, the world’s number one weapon supplier, are trading near their all-time high, reports the Financial Times.
There are only two things known in the devastating Syrian war. That half a million people have been killed. And that a war in the Middle East does not end.
shreerupa@gmail.com
(The article appears in the April 16-30, 2017 issue of Governance Now)