Nearly all who got Aadhaar numbers already had valid ID proofs

One of the justifications for Aadhaar, the unique identity project, was to provide an authorised identification to people who did not have any. In India, a vast number of people, it is believed, do not have any ID papers, and UID would give them one, even if it would add an extra paper for many who already had one (driving licence, passport, ration card, PAN card etc).

Indeed, according to the 2010 Strategy Overview (Click here) of the UIDAI, “an inability to prove identity is one of the biggest barriers preventing the poor from accessing benefits and subsidies”.

This, however, turns out to be a dubious justification for the humongous and costly project. Replying to an RTI query, the UIDAI has said that only 2.19 lakh Aadhaar numbers (out of 83.5 crore issued so far) have been issued through the ‘introducer’ system, that is, to people who did not have any ID papers at all. [The reply attached below] For the rest of 83.4 crore-plus people, Aadhaar was not needed, not at least for the identity purpose.

[The Aadhaar enrolment process requires an applicant to submit two valid IDs, or go through the “introducer system”. In this option, an applicant without ID can enrol for an Aadhaar number through an introducer who is authorised by the registrars for this purpose.]

The RTI application was filed in April 2015 by Ujjainee Sharma and Trishna Senapaty, and the reply from the deputy director and CPIO of UIDAI came the same month.

It seems the project started out with a faulty assumption. On the other hand, of course, a large number of the poor in India, living in difficult terrain or far-flung places, are without any identity documents. But then the RTI reply indicates that they are yet to be reached out, and “one of the biggest barriers preventing the poor from accessing benefits and subsidies” is yet to be dismantled. Either way, a debate is called for. 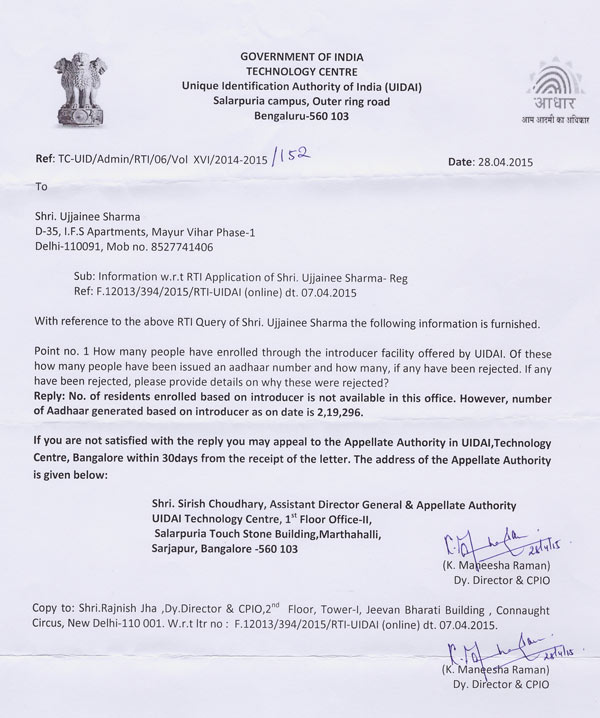