Is it possible to be an atheist in a country which blindly worships religion? MM Kalburgi was gunned down by two unidentified people at his residence in Dharwad on August 30, 2015.

I ask why the Almighty created this world which is nothing but a living hell, a place of constant and bitter unrest. Why did he create man when he had the power not to do so? Have you any answer to these questions? You will say that it is to reward the sufferer and punish the evildoer in the hereafter. Well, well, how far will you justify a man who first of all inflicts injuries on your body and then applies soft and soothing ointment on them? …I tell you that the British rule is not there because God willed it but for the reason that we lack the will and courage to oppose it. Not that they are keeping us under subjugation with the consent of God, but it is with the force of guns and rifles, bombs and bullets, police and militia, and above all because of our apathy that they are successfully committing the most deplorable sin, that is, the exploitati on of one nation by another. Where is God? What is He doing? Is He getting a diseased pleasure out of it? A Nero! A Genghis Khan! Down with Him!”

These lines are from revolutionary leader Bhagat Singh’s famous essay ‘Why I Am an Atheist’. At the age of 23, he wrote the essay in Lahore jail waiting for his hanging. But the ‘religious and godfearing’ people of India didn’t hesitate to admire the ‘atheist revolutionary’.

When he received the crown of martyrdom on March 23, 1931 people had started calling him ‘Shaheed-e-Azam’ (the king of martyrs). In his autobiography Jawaharlal Nehru referred to “the phenomenon of Bhagat Singh, and his sudden and amazing popularity in north India”. Four years after Bhagat Singh’s death, the director of intelligence bureau, Sir Horace Williamson, noted that “his photograph was on sale in every city and township and for a time rivalled in popularity even that of Mr Gandhi himself.”

This was India of yesteryears under the British rule. The picture of India today is totally different. It has become dangerous to propagate rationality or atheism in independent and democratic India. The murder of the Kannada writer and former vice-chancellor of Kannada university, Hampi, Prof MM Kalburgi is an example of this precipice situation. Prof Kalburgi was shot dead by two unidentified persons at his house in Kalyan Nagar, Dharwad, on August 30. He was known for his strong stand against superstitious practices and right-wing groups.

He authored several books and was respected widely for his fearless opinions based on his scholarly studies. He received the prestigious Sahitya Akademi award in 2006 for a collection of his research articles on Kannada folklore, religion, and culture. He was facing threats for his strong stand on various issues, including his comments on idol worship. The manner in which he was murdered matches the Govind Pansare killing. The rationalist leader was murdered in February 2015. Pansare was a close associate of Prof Kalburgi. Similarly, two years back, popular anti-superstition activist and founder of Maharahtra Andhashraddha Nirmulan Samiti, Narendra Dabholkar was gunned down in 2013 in Pune. Pansare, a close friend of Dabholkar, had strongly supported his demand to pass the Anti-Superstition and Black Magic Act in Maharashtra. 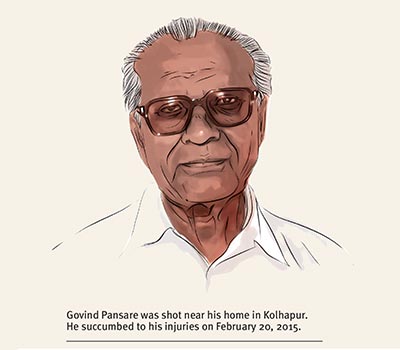 This is how India has lost its three scholars and activists committed to create rationality and scientific temperament among the masses. It is not a mere coincidence but an example of growing intolerance in our society. These cases of murder are not solved yet but people have no doubt about the involvement of right-wing extremists. Their assumptions are not baseless. A group of organisations led by the BJP’s ideological mentor Rashtriya Swayamsevak Sangh (RSS) held several protests against Prof Kalburgi last year. RSS-linked Bajrang Dal activist Bhuvith Shetty was arrested for posting an alleged comment on Twitter threatening Kannada writer KS Bhagwan for his remarks on Bhagwad Gita. Prasad Attavar, former vice president of the Sri Rama Sena linked to the Bajrang Dal, was also booked for sharing Shetty’s hate tweet on his Facebook page.

Hate campaigns and manufacturing divide between communities through baseless propaganda has become political tool these days. It affects minds and who will react how cannot be ascertained. It was not only Nathuram Godse who killed Mahatma Gandhi. In his letter to RSS chief MS Golwalkar and Hindu Mahasabha leader Shyama Prasad Mukerjee after Gandhi’s assassination, home minister Sardar Patel wrote, “All their (RSS) leaders’ speeches were full of communal poison. As a result of the poison an atmosphere was created in which such ghastly tragedy (Gandhi’s assassination) became possible… RSS men expressed joy and distributed sweets after Gandhiji’s death.”

Some could argue that these scholars have no respect for religious beliefs and they hurt people’s sentiments. But history of civilisation tells us that these arguments had created hurdles in the journey of humanity. Had our ancestors not confronted with ‘beliefs’ of their time, development of science and technology would have stopped. In 1600 AD, Italian philosopher and astronomer Giordano Bruno was burned at the stake by the order of the Roman catholic church, because his theories were contrary to the church’s beliefs.

He proposed that the stars were just distant suns surrounded by their exoplanets. He also insisted that the universe is in fact infinite and could have no celestial bodies at its centre. Bruno’s scientific theories went even further than the Copernican model which placed the sun and not earth at the centre of the universe. Obviously, the church was feeling ‘hurt’ and finally exercised its power to execute.

Now, even students of class six know that the church was wrong and Bruno was right, though they are also surrounded by the stories in which earth is stable on the head of sheshnag (a mythical serpent). Actually, every book of science contradicts mythological beliefs and it would be horrible if any group of believers start burning these books because they ‘hurt’ their sentiments. 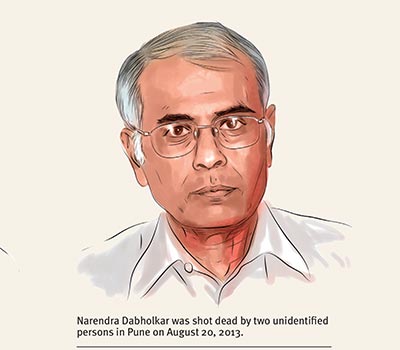 Nowadays rationalists are being targeted for showing disrespect to the tradition and culture but the history of India is totally different. In this land of idol worship, Arya Samaj founder Swami Dayananda Saraswati who strongly denounced idolatry and ritualistic worship is greatly acknowledged and respected. He asserted that idolatry led to India’s political slavery and degradation. By depending on idols and not exerting themselves, Indians had lost their government, independence, wealth and pleasure. He had strongly argued with the scholars of Kashi when a shastrarth (religious debate) was held at Durga Kunda. He had faced strong opposition, but no one dared to attack him physically. Giving respect to scholars and organise shastrarth is tradition of Kashi and India.

In 15th century, the saint poet of Kashi, Kabir Das had strongly attacked rituals and superstition of both Hinduism and Islam. Kabir wrote; “Jo tu brahmin, brahmini ka jaya, aur rah te kahe na aya,  jo tu turk, turkani jaya, petahi kahe na sunnat karaya” (If being born of a Brahmin mother makes you Brahmin, were you born in some different way? If being born of a Turk mother makes you a Turk, then why were you not circumcised in the womb itself?).

Kabir became a symbol of truth and got great respect. But the scholar of 21st century democratic India could not enjoy the level of the freedom which was available in the 15th century under the rule of feudal monarchs. What an irony!