Where water is lethal

Villages along the Indo-Pak border in Punjab cannot use well water for drinking. The arsenic concentration in the water is 20-50 times the WHO’s safe limit Well water in about 400 villages along the India-Pakistan border in Punjab is laden with deadly arsenic. The World Health Organisation (WHO) sets a safe limit of 10 micrograms of arsenic per litre in water for drinking. In many wells on both sides of the border, the concentration of arsenic is 20 to 50 times the limit. The problem affects 90 million people – that’s roughly five times the population of Mumbai.

A team from the TERI School of Advanced Studies (TERI SAS), Delhi, Columbia University, and Quaid-i-Azam University, Islamabad, sampled water from about 30,000 wells in 199 Indian and 184 Pakistani villages. Water from 23 percent of the wells was found unsafe. The team has put blue tags on hand-pumps drawing from wells with safe water, and red tags where the water is unsafe.

Dr Chander Kumar Singh, a professor at TERI SAS’s energy and environment department, who led the study on the Indian side, says villagers in Punjab were very concerned about arsenic poisoning and responsive to the team’s efforts. They readily agreed to drink only from wells marked safe and use water from unsafe wells only for washing, etc. They are better off than people facing the same problem in other parts of the world, such as Africa, because 87 percent of the households in these villages can get safe water within 100 metres. In Bihar and Bengal, however, Singh found villagers indifferent and irresponsive: they would say they had been drinking unsafe water for ages anyway.

From medieval times to the late 1800s, arsenic has been the stuff of myth and conspiracy. Just a quarter of a gram of it can kill an adult human. Intriguers are suspected to have used it to dispatch kings, popes, unloved family members. As ratsbane (arsenic trioxide), it has been used against vermin. In mountebanks’ potions, it has been peddled as a cosmetic to improve complexion. Princes are believed to have been fed small quantities of it since childhood as a protection against poisoning.

It was only from the 20th century on that scientists understood the ill effects of consuming water or food contaminated with microscopic quantities of arsenic. Preliminary symptoms in people who drink arsenic-contaminated water are headaches, dizziness, diarrhoea, and changes in skin colour. A few years on, they show non-cancerous skin growths (keratosis). Slow arsenic poisoning may also cause skin, kidney, and lung cancer. In children, it may cause malfunctioning of internal organs, affect IQ, interfere with immunity. In vegetables, fruits, and plants, it inhibits growth.

Contamination of ground water with arsenic is widespread in Pakistan, Bangladesh, Nepal, Chile and Argentina. A 2007 study found that more than 150 million people in 70 countries drink ground water contaminated with arsenic. The problem is particularly severe in low-lying areas along the Indo-Gangetic-Brahmaputra plains. In 1995, a scientist from the University of Colorado called it a Chernobyl-like disaster.

Himalayan rock is the major source of arsenic in the ground water in India, says Suvrat Kher, a sedimentary geologist and blogger. Arsenic is found in combination with oxygen, hydrogen, chlorine, mercury, iron etc. When these minerals are weathered from the rock, they are deposited in the alluvial plains and ultimately enter the water table.

Three paise is all it takes to remove arsenic from a litre of water using a filter developed by Prof Sirshendu De, head of the chemical engineering department at IIT Kharagpur. Each unit costs '4,000 and uses the reaction by which laterite soil naturally absorbs arsenic from water. It is an extremely cheap alternative to standard arsenic filters, which use activated aluminium, an expensive, synthetic material.

De’s invention has been recognised by the centre, the West Bengal government, and Unicef. His filters have been installed in government schools in parts of Bengal and Assam where the ground water contains unsafe levels of arsenic. Since 2012, when it was developed, the filter has helped 30 lakh people.

“During field work in 2003, we found there was no arsenic in the ground water in Purulia, Midnapore, and Bankura districts. These districts have laterite soil, unlike districts in the Indo-Gangetic basin, which have alluvial soil. Laterite, which is red, contains a lot of iron and aluminium oxides. They are natural absorbents of arsenic. Our filters mimic this process, precipitating arsenic as an insoluble waste and making water safe,” he says.

He explains how ground water in the Indo-Gangetic basin gets contaminated with arsenic. Himalayan rock contains arsenic as iron and aluminium compounds. When weathered rock dust is carried by water to the plains, arsenic compounds mix in the alluvial soil and gradually poison ground water. Farmers using phosphate fertilisers hasten the process: phosphates bond with arsenic forming soluble compounds that enter the water table.

De’s filters are ideal for rural areas. They need no electricity, are maintenance free, and can treat 100 litres of water daily. They work without replacement for five years.

Reports such as theirs are ignored, as it’s not an electoral issue, says Dr Singh. Tubewells are not a solution, but administrators sink them, claiming they are 400-500 metres deep and so the water is safe. But there’s no way of checking these claims, says Dr Singh. He says the Punjab government must concentrate on the northern parts of the state, where arsenic, with fluoride and nitrate, is present at dangerous levels in the ground water. “We have shared the report with the government, but they haven’t bothered to acknowledge it.” 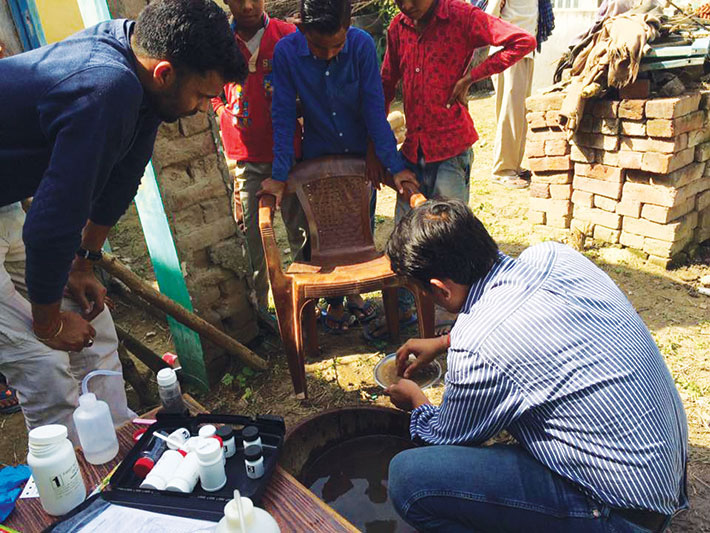 The Bihar and West Bengal governments were equally heedless. “They did not take enough steps to curb the problem,” says Dr Singh. “It’s a social problem, not just a technological problem. It was shocking how people in Bihar responded when we explained the ill effects of arsenic poisoning. Such callousness helps the government get away without doing anything. Lack of awareness is a major reason for the failure of multiple efforts.”

He says that not just in Punjab, Bihar or West Bengal, some nine million wells in the entire Indus and Gangetic plains must be tested. Contamination is such a heterogenous problem that wells in the same village may test differently: one may be unsafe and three or four near it could be safe.

Besides Dr Singh, the researchers on the team were Alexander van Geen and Taylor Ellis of Columbia University. The Pakistan side of the study was conducted by Junaid Ali Khattak, Abida Faruqi, Nisbah Mushtaq and Ishtiaque Hussain of the Quaid-i-Azam University.