A gasping economy means bad politics for the Bharatiya Janata Party that is hoping to recreate the 2014 magic when it won the parliamentary election with a brute majority.

Demonetisation has dented the economy and the latest data is quite grim. India is no longer the world’s fastest growing economy, a fact that BJP leaders had been going to town about. The new figures are bound to take the wind out of their sails.
In the third year of the Narendra Modi government, the economy is now down to 7.1 percent, with the Q4 post-demonetisation figure a disheartening 6.1 percent. Three years of higher spending by the government has not yielded the desired result.
In defence, finance minister Arun Jaitley on Thursday said demonetisation was not the reason behind the shocking fall in the growth rate. He even said signs of slowdown were visible even before the November 8 move, though he did not elaborate.
Things were frankly quite better during the of the UPA tenure, when economist-turned-politician Manmohan Singh was at the helm of affairs.
“Average GDP growth rate during the period of UPA government (2004-05 to 2013-14) has been 7.7 percent despite two global slowdown in this period,” said the report card titled ‘10 Years of Progress and Growth’ which in January 2014 highlighted the achievements of the government led by Singh.
Months later, the UPA lost the elections and the BJP-led NDA came to power.
The GDP growth rate at constant prices (i.e., at the price level of the base year 2004-05) has been fluctuating during the period 2001-02 to 2013-14. The fluctuations range from 3.84% in the year 2002-03 to 9.57% in 2006-07.
The GDP growth rate decreased from 5.81% in 2001-02 to 3.84% in 2002-03. Thereafter, GDP growth rate increased and reached a high growth trajectory of 9% plus growth. India experienced three consecutive years of GDP growth rate in excess of 9% viz. 9.48% in 2005-06, 9.57% in 2006-07 and 9.32% in 2007-08, said community.data.gov.in. 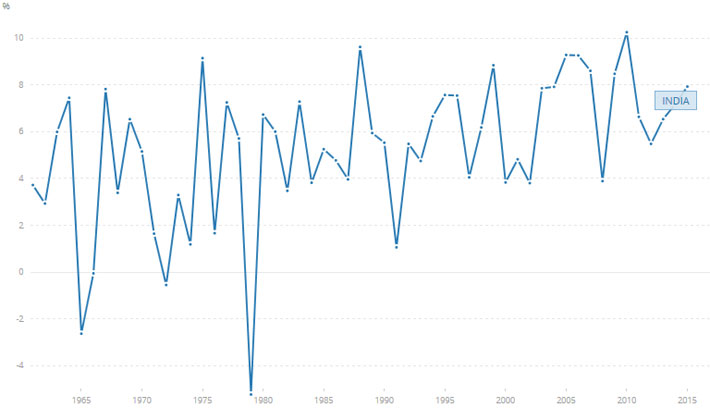