Will this end the ledger-demain?

The NFRA, meant to oversee CAs and accounting practices, is finally off the blocks. But will it be independent and effective? Chartered accountants may have succeeded stupendously in business or as corporate heads. But as auditors, they haven’t given a sterling account of themselves as the gatekeepers they are meant to be. The whiff of chicanery hanging around lawyers now hangs around big auditing firms and CAs too. Of late, it has got stronger. Despite auditors, the Satyam scam (Rs 14,162 crore) and the Punjab National Bank scam (Rs 11,356 crore) were late in coming to light. Over the last couple of years, the enforcement directorate (ED) has been raiding CAs and tax lawyers to unearth black wealth from shell companies. In 2018, over one lakh shell companies were deregistered; this year, over 2.25 lakh are under scrutiny. Many CAs have been booked for siphoning off bank loans. Last fortnight, a CBI court trying a bank fraud case in Mumbai gave six persons life terms, one of them a CA.

Arun Kumar, a former professor of economics at JNU, says, “Chartered accountants don’t maintain arm’s length from the companies they audit. Companies pay them, so they have to do what the company wants. Besides, CAs are involved in other businesses. Their interests coincide with those of their clients. Both are open to each other’s suggestions. In India, CAs haven’t faced the consequences for this cosiness with corporates.”
When tax audits were mandated in 1984, it was with the expectation that CAs would be independent, without conflict of interest, and in a relationship of trust with shareholders and the government. Tax returns filed with a CA’s stamp of approval were trusted: like a lawyer, he would do the best for his client but make sure it was within the law. Over time, though, sharp practice became par for the course.
Perhaps the worst indictment of the profession came from prime minister Narendra Modi in a Chartered Accountants’ Day speech on July 1, 2017: he virtually advised them to desist from unethical practices and said the Institute of Chartered Accountants of India (ICAI), which not only conducts the qualification exams but also regulates and disciplines CAs, could do more. It’s a view shared by many: an elected body chosen from among CAs cannot possibly be harsh on errant members.
Realising this, in 2010, the parliamentary standing committee on finance, in its 21st report on the Companies Bill, 2009, recommended the creation of an independent body to monitor the quality of audits. This went ignored for eight years. In a parallel development, in February 2018, the supreme court, too, ruling on a matter of multinational audit firms operating illegally in India through tie-ups with local CAs, asked the government to set up a committee to deliberate on auditing in India. But before the committee submitted its report (in October 2018), the centre  approved the creation of the National Financial Reporting Authority (NFRA). Rules were notified in November, setting out the powers, jurisdiction, roles and duties of the body.
KVR Murty, a joint secretary in the ministry of corporate affairs, says, “The NFRA was included in the Companies Act 2013 with the motive of bringing greater transparency and setting auditing standards. There is the ICAI, but its very structure has conflict on key issues. Also, there were many cases pending in which the government was the complainant. So the NFRA became the need of the hour.”
Says Arun Kumar, “Actually, the ICAI should have provided the framework of correct auditing. It has not worked as a professional or independent body. Since we have a very feudal mindset in India, people in power think they are doing favours; therefore, there was a need for the NFRA. In developed countries, professional bodies maintain credibility and the image of professionals as those who take pride in their work.” 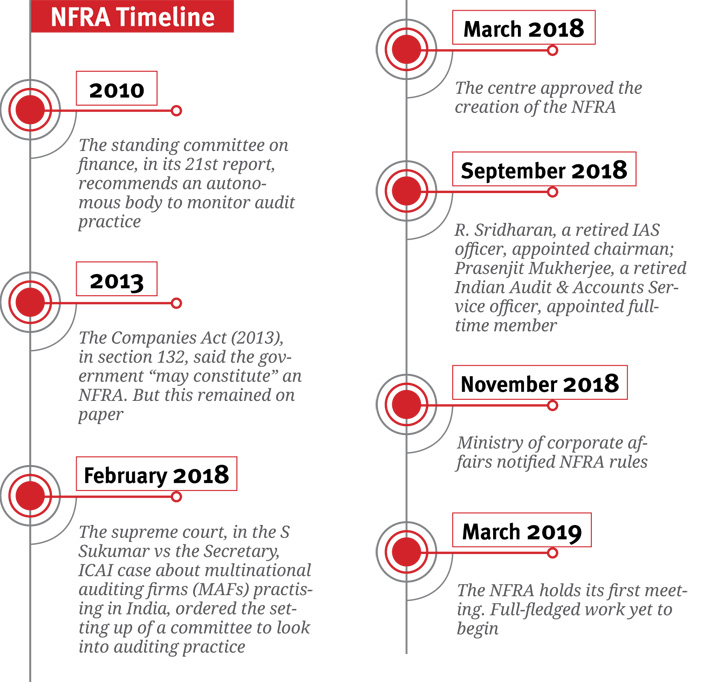 “The need for an independent body was always there,” says Kamal Nayan Kabra, political economist and author of The Black Economy in India: Transition to Grey Political Economy. “One can’t put the entire blame on CAs without making the company law sound. As it is, the ICAI has failed to regulate the working of CAs. You can’t expect CAs to self-regulate: the ICAI is an elected body, so how can it impose discipline on those who elect them?”
The ICAI had been lobbying against the constitution of NFRA till now, fearing that its own role will significantly diminish after the constitution of the new authority. It has been complaining that it wasn’t consulted while the NFRA rules were framed. It contends that with the NFRA, there would be a regulatory and disciplinary overlap, and that this isn’t in harmony with international best practices. This is not true: the move is towards independent oversight and some self-regulation. In the UK, for example, auditors of public companies are regulated by the Financial Reporting Council, though five recognised self-regulatory bodies are assigned certain tasks related to audits of private companies. The FRC, moreover, can penalise the self-regulatory bodies. In the US, the Public Company Accounting Oversight Board regulates auditors of public companies, while professional bodies regulate auditors of private companies. To avoid conflict of interest, elected practising accountants are part of the disciplinary body along with unelected independent members. China’s finance ministry, its Institute of Certified Public Accountants and Securities Regulatory Commission all keep watch on auditors.
Such resistance from the ICAI was expected, says VK Suri, a banking and finance expert who has taught at banking academies. “The ICAI thinks it will lose all its powers to the NFRA, but it wasn’t able to govern auditors. Till now, CAs thought they could get away with wrongdoing. In a country like India, you can’t expect voluntary regulation. It has to be forced discipline.”
The NFRA sets itself lofty objectives. Murty says the organisation, having been set up despite great odds, will “regulate the functions of auditing by separating the professional part from the academic side”. What he means is that while the course, the exams and so on will continue to be under the ICAI, the NFRA would concern itself with professional conduct and ethics. Beyond that, he says, “Auditing standards notified by the ICAI will come via NFRA, which will also oversee compliance by auditors of companies meeting certain criteria (see box). This will work out to 8,000-10,000 companies. Auditors of these companies will have to submit reports to NFRA.” 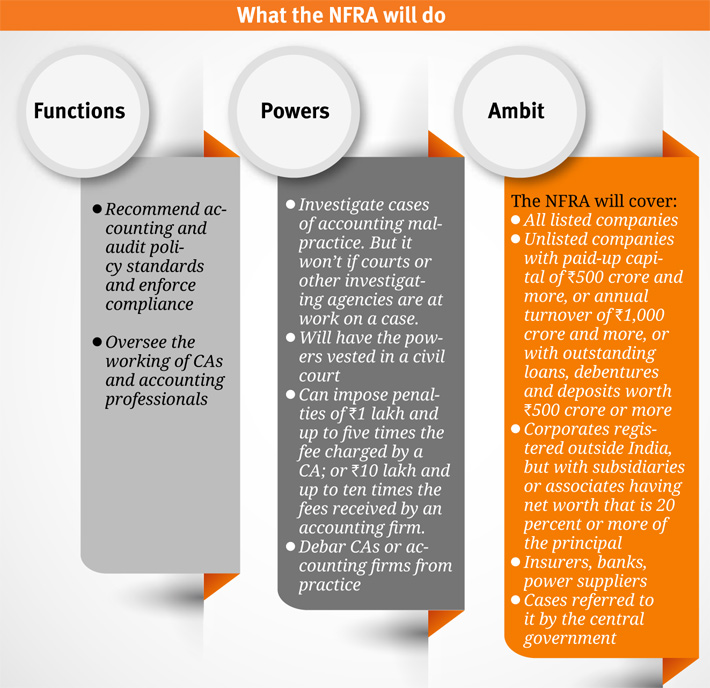 The trouble is the NFRA is yet to start functioning. Moreover, there are doubts about whether it will be able to perform effectively and independently, being a government body. As it is, it took eight years from the standing committee’s recommendation to the apex court’s intervention for the NFRA to be born in November 2018. It has a chairman, R Sridharan, a retired IAS officer; a full-time member; and three ex-officio part-time members. A secretary is yet to be appointed.
Given the task before it, the NFRA will need huge funds. But there doesn’t seem to be enough in sight. The 2018-19 budget has allocated '564.15 crore to the ministry of corporate affairs, and the NFRA will end up with about '31 crore. In contrast, its US counterpart, the PCAOB, is allotted $273.7 million or about '1,800 crore.
Experts also worry about its leadership and its independence. Says Arun Kumar, “The bureaucracy thinks it has all the understanding, whereas it doesn’t. Though IAS officers have a lot of autonomy, they are still subject to political pressure. Most retired bureaucrats know how to fudge things. Given the way appointments are made to autonomous bodies, they haven’t been able to function they way they should. We are neither able to set up properly autonomous bodies nor take care of self-regulation.”
Murty, though, is upbeat. “You can’t expect an organisation to be functional in six months. The NFRA has already started looking at work done by auditing firms and is studying audit files. Recruitment rules are being framed and will come out soon. In 12-18 months, the NFRA will be fully functional and results will show in the coming months.”
With the NFRA in place, India is eligible for membership of the International Forum of Independent Audit Regulators (IFIAR), denied so far since ICAI does not qualify as an independent regulator in the eyes of the world though it vociferously defends its turf.
rahultrivedi@governancenow.com
(This article appears in the May 31, 2019 edition)