The budget proposals on political funding are not enough. They will only make it more secretive Finance minister Arun Jaitley before presenting the budget for 2017-18

While presenting the budget, the finance minister made an announcement about making donations to political parties more transparent. If the proposals to amend the relevant laws are approved by parliament, from April 2017 donations to political parties can be made in cash only up to Rs 2,000; payments of higher value will be only through cheques or digital mode and donors will be able to buy ‘electoral bonds’ that will be sold through commercial banks under the regulations made by the RBI. Some commentators have hailed this as a major step forward, while some of us have been sceptical.

If the amendments are approved, political party funding is likely to become largely opaque in future. Here is why this is a very real possibility. The finance bill proposes to amend the Reserve Bank of India Act, the Income Tax Act, and the Representation of the People Act. The RBI Act is sought to be amended to allow for the issuance of electoral bonds. The IT Act is sought to be amended to exclude donations received by these political parties through ‘electoral bonds’ from being reported to the IT department every year in order for them to continue to avail the exemption from paying income tax.

Section 29C of the RP Act, for which the Vajpayee government claims credit, requires all recognised national and regional political parties to make annual declarations of contributions received from individuals and companies in excess of Rs 20,000. The ECI publicises the contribution reports of parties on its website as and when it receives them. The Association for Democratic Reforms also recently disseminated a detailed analysis of the donor reports submitted by parties for 2015-16. The import of the amendments proposed to the RP Act is that parties will not be required to disclose the identity of individuals and companies who make donations through electoral bonds bought from the commercial banks.

If approved by parliament, the combined effect of the amendments to the RBI Act, the IT Act and the RP Act is likely to be as follows:

* Many parties are likely to strive to receive cash donations below Rs 2,000. Thanks to Section 29C of the RP Act, which applies only to donations of Rs 20,000 or above, these will not be required to be reported to the IT department or to the ECI.

* As donations received through electoral bonds are exempt from being included in the annual reports of parties to the IT department or the ECI, these amounts will also not be reported.

* Only such contributions received about Rs 20,000 through cheques or digital mode of payment will be required to be reported to the IT department and the ECI.

In other words, parties will be under no obligation to disclose any donation or contribution that they receive at all, unless it is made electronically or through cheques.

The process through which these changes are to be made is also hugely problematic. The finance bill is a money bill and the Rajya Sabha has no powers to vote or make any amendments in money bills. However, the definition of ‘money bill’ as provided in Article 110 of the constitution is crystal clear. It cannot and must not include matters other than those relating to the imposition of taxes or matters related to the Consolidated Fund of India. The amendments proposed here clearly do not fall within this criterion. So once again the government is trying to bulldoze amendments to other laws through legislation labelled ‘money bill’ to prevent any actionable dissent in the Rajya Sabha.

The parties connived to a similar action in 2016 when the Foreign Contribution Regulation Act was amended to permit parties to receive donations from Indian subsidiaries of MNCs. That proposal was also pushed through a finance bill. This is grave constitutional impropriety, to say the very least, and seems to be becoming a habit.

Is this a step forward in political party funding or a leap backward into the era of secrecy ordained by law (and not absence of a law as was the case earlier), readers may decide for themselves.

As parties are refusing to be covered under the RTI Act despite a June 2013 order of the Central Information Commission, citizens will not be able to access information about their funding through that channel either. So while regulating agencies like the IT department and the ECI are deprived of their powers to make party funding transparent, citizens will also not have any means to find out which party has collected how much money and from whom. The entire exercise of demonetisation is also not likely to help bring in any transparency in this matter.

The finance minister seems to have gone back on his promise that the government would implement every word of the prime minister’s speech made on new year’s eve, where the PM assured the country about taking the lead to clean up political party funding. 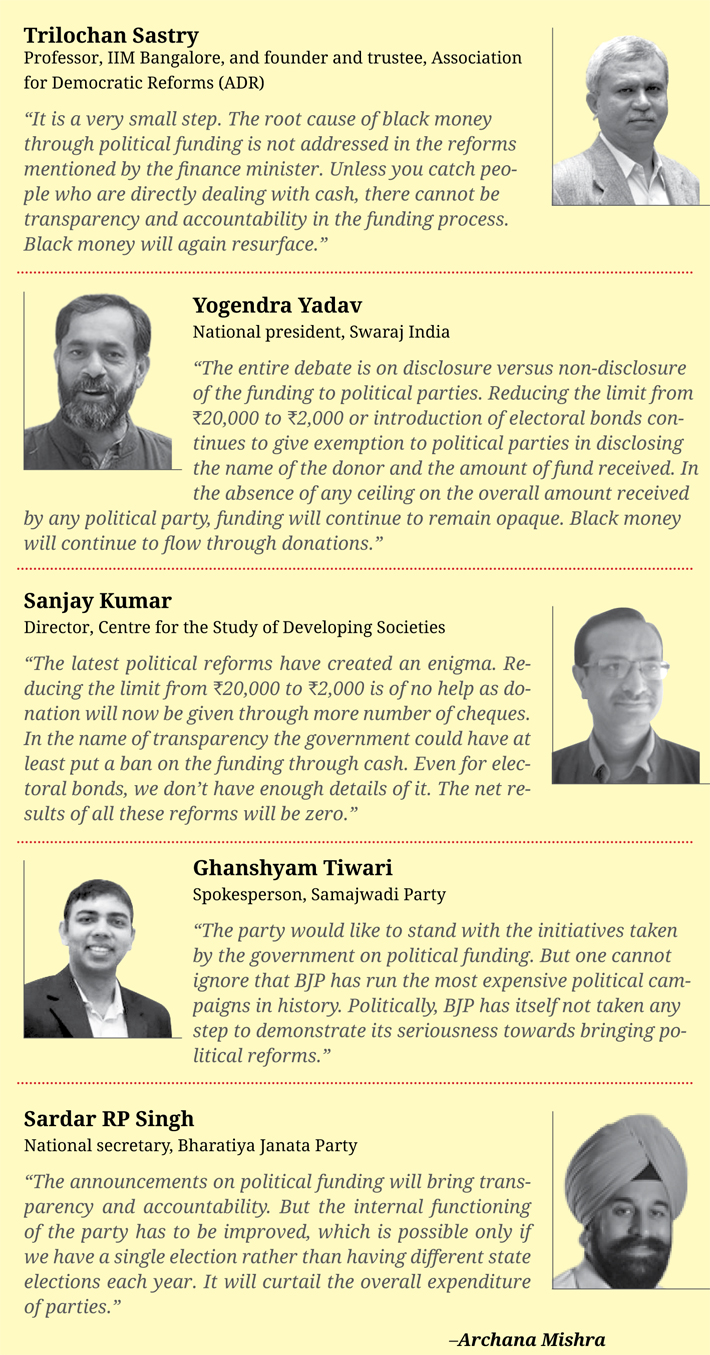