Control and execution of functions by city governments (Picture for representation purpose only)

Importance of strengthening city governance
Cities in India contribute to about 60% of the economic output of the country, acting as the engines of economic growth [World Bank. (2020). Urbanization in India. Online available at: https://www.worldbank.org/en/news/feature/2011/09/22/india-urbanization Accessed 9 Mar. 2020]. These engines need to be run efficiently to have greater positive impact on economic growth of the country. Therefore, specific focus is required to develop the cities, thereby creating a positive impact on life of the booming urban population in the country. City governments (municipal corporations, municipal councils and nagar panchayats) in the country were constituted through the 74th Constitutional Amendment Act, 1993  (74th CAA) [2020. The Constitution (74Th Amendment) Act, 1992. [ebook] Ministry of Housing and Urban Affairs, Govt. of India. Available at: http://mohua.gov.in/upload/uploadfiles/files/74th_CAA13.pdf ], forming the third tier of government responsible for effective municipal governance and functioning of cities. It is essential that city governments hold the control, powers and authorities to perform functions that are fundamental to achieve sustainable urban development and fulfilment of the basic needs of an urban citizen.

Lack of control over urban functions under city governments
This leads one to probe questions such as why our cities are so poorly managed and not being able to deliver basic services efficiently, or what functions are performed by the city governments across the country on ground. 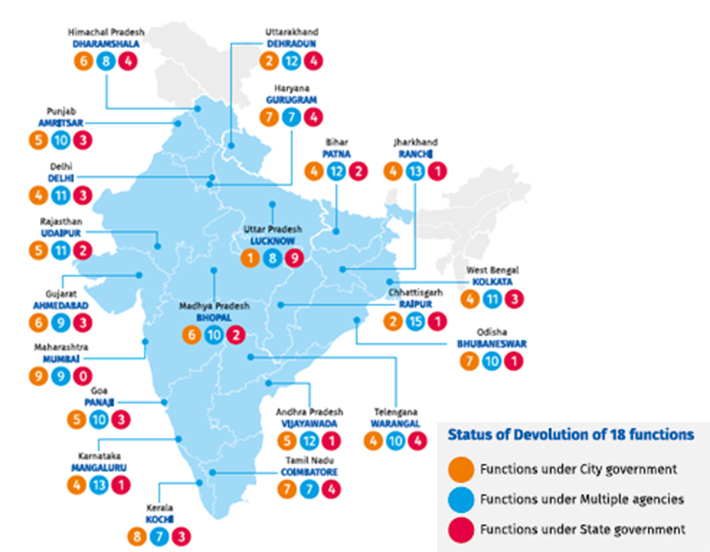 Praja Foundation’s Urban Governance Reforms Study [Praja.org. (2020). Online available at: https://praja.org/praja_docs/praja_downloads/National%20Consultation%20On%20Urban%20Governance-%20Key%20Finding%20From%2021%20States.pdf  Accessed 5 Mar. 2020] on 21 cities involved mapping of 18 functions under the Twelfth Schedule  [Anon, (2020). [ebook] Ministry of Housing and Urban Affairs, Govt. of India, p.356. Available at: https://www.india.gov.in/sites/upload_files/npi/files/coi-eng-schedules_1-12.pdf  Accessed 9 Mar. 2020] inserted in the 74th CAA and gives us a picture of the scenario on ground. The findings show that 13 out of the 21 cities have independent control over only 5 or less than 5 functions, among which cities such as Lucknow, Raipur and Dehradun which are capitals of their respective states have independent control over just 1 or 2 functions. Most city governments in the country independently control only minor functions such as services of registering births and deaths, building and maintenance of crematoriums etc., and the only large scale function which is dominantly controlled is solid waste management (SWM). Primary urban functions such as urban planning, construction and maintenance of urban infrastructure such as water supply, sewerage, storm water drains, roads and bridges etc., are not directly controlled by the city governments. It is of utmost importance for such urban functions to be controlled by a decentralised self-governing entity at the city level to achieve better planning and execution of projects in the city. This indicates that city governments need to be entrusted with independent control over functions that are vital for city development.

Issue of multiple agencies operating in the city
Having talked about independent control, most of the functions in reality are actually handled by multiple agencies that operate within the city. This is justified by the Praja’s study as remarked earlier where the findings also show that all the 21 cities studied experience involvement of multiple agencies in 7 functions out of the 18 functions at the least. We see roads that are dug up, footpaths that are broken and roads getting flooded immediately with just light showers in our cities most of the time. This is a result of multiple agencies such as specialized bodies set up by the state government, State government departments and city government involved over overlapping functions. In the city of Panaji, Goa, the function of roads is under the control of public works department (PWD), the functions of water supply and sanitation is controlled by the public health and engineering department (PHED) and function of street lighting is under the control of Corporation of City of Panaji (CCP). This multiplicity of control under multiple agencies is the cause of the chaos we see pertaining to urban infrastructure in our cities. Unfortunately, the story is the same across cities in the country. This points out the crucial need for cities to have autonomous control over these urban functions to eliminate such issues prevailing in the cities due to the presence of multiple agencies.

Multiple agencies and their lack of accountability
As mentioned earlier, multiple agencies also include specialized bodies set up by the state government. These are the agencies of the state government which hold expertise on a specific dedicated function or are constituted for a particular purpose. Such agencies exist in most of the cities today operating on functions such as urban planning, water supply etc., or to implement various state government and central government schemes and or missions in urban areas. For example, in Delhi, the Delhi Jal Board (DJB) which looks after the function of water supply and sewerage for the entire city, while Karnataka has constituted Karnataka Urban Infrastructure Development and Finance Corporation (KUIDFC) to implement state government infrastructure development schemes in urban areas of the state. The constitution of such agencies can be considered a bypass of the 74th CAA in the first place. However, the main issue lies in the accountability of such agencies towards the citizens. These agencies lack provisions of legislative structure wherein elected representatives have key role to play and hence there are no platforms where citizens voice are represented. Whereas, city government has legislative wings with elected representatives representing citizen’s voice in the council meetings, and various committees constituted in the structure. Hence, the point to be taken here is that specialised agencies are less likely to be answerable to the citizens of the city. Therefore, it is imperative to reiterate that city governments need to be empowered with independent controls over all vital urban functions. However, city governments may hand over execution of projects or schemes under these functions to specialised agencies in cases as per requirement, by acting as an empowered self-governing nodal agency in the city.

Need for building capacity of city governments
The common argument one would come across on this subject is that city governments cannot be given responsibility over major functions because it lacks the necessary capacity to plan, finance and operate projects and ensure service delivery. The counter to this is that city governments have been constituted for the purpose of urban local self-governance. Therefore, the onus is on the state government to transfer powers and authorities to city government to enable effective implementation of projects and service delivery at the city level. To add to this, state governments need to ensure mandatory and regular capacity building trainings are conducted for the officials and elected representatives of the city government. This will ensure upgradation of technical skills, awareness of the duties, responsibilities and equipping with latest domain knowledge and skills. These interventions as a whole can ensure improvement of capacity and thereby boost performance delivered by the city governments.

Road ahead to achieve sustainable urban development
It has been more than 25 years since 74th CAA came into force, which aimed at strengthening urban local governance in the country through constitution of city governments. Yet, it is quite clear that city governments still face a sorry state of affairs. It is high time that city governments are entrusted with independent control over all vital urban functions that need to be planned and executed at the city level. City governments need to hold powers to entrust execution of projects or schemes to the specialised agencies considering the matters such as current lack of capacity. City governments need to function as independent self-governing nodal agencies among the multiple specialised agencies operating within the city. State governments need to handhold the city governments with powers and authorities to boost efficiency in performance of functions and conduct capacity building initiatives to upgrade technical skills, spread awareness and equip with latest technology and know-how. All of these reforms are required to set a strong foundation to run the engines of economic growth efficiently and achieve sustainable urban development in the country.

The authors are with the Praja Foundation, Mumbai.