Our relationship with water

A collection of essays on the multi-dimensional character of water, this work walks us through the evolution of our understanding of this resource The editors of Water: Growing Understanding, Emerging Perspectives faced a considerable challenge in selecting 29 articles that were published previously in the journal Economic and Political Weekly (EPW) on the theme of water. While they claim that “from being virtually absent from EPW till the 1980s, water emerges as a growing concern in the decades to follow, with the number of articles on water-related issues increasing very rapidly”, I would tend to disagree with the former part of this assertion. Six years back, when I was thinking of a doctoral research, I looked up EPW archives (and Economic Weekly) to understand the early discussions on irrigation in India, immediately after independence.

A vision shared by economists in the early 1950s was that irrigation was as crucial for agriculture as steel was for industrial edifice. An article by HT Parekh (August 26, 1950) talked about priorities before planners and talked about the policy by the Madras government as “the best approach”. It also looked at multipurpose river valley projects with much hope.

By the mid-50s, KG Sivaswamy shared what was being discussed amongst administrators on implementing irrigation schemes as community projects (February 13, 1954). In the same year, Damodar Valley Corporation secretary Sudhir Sen was pondering over the ways to tackle ‘Delays in executing power and irrigation projects’ (October 26, 1954). Social scientists like Scarlett Trent had started to examine ‘Irrigation and Socio-Economic Change’ within village studies tradition (September 10, 1955).

By the early 60s, economists like Ranjit Gupta started to study the costs and returns from major and minor irrigation works (December 16, 1961) and by the mid 60s, we witness KM Bhatia asking, ‘What is Wrong with Our Irrigation Projects’ (October 15, 1966).

The editors claim that “between 1966 and 1990, there was, on an average, one paper on water every year in EPW”, and juxtapose this with “roughly one paper per month on water” that EPW has featured after 1990. However, I believe EPW archives (including EW in the years preceding 1966) has a lot to offer to us if we wish to understand how our perspectives on our relationship with this resource called water has evolved over the years.

For instance, while starting as early as 1981, EPW published many papers taking a critical view of the Narmada project; look at how an editorial looked at the ‘dream’ of multipurpose river valley projects on the river Narmada (April 8, 1961), written during the week when prime minister Jawaharlal Nehru laid the foundation stone for a 220 feet high Navagam Dam. However, if one looks at those couple of early 80s EPW articles on the Narmada dam, one realises that the construction workers’ woes found an empathetic audience in the pages of this weekly journal.

In the mid 80s, two young nature enthusiasts, Ashish Kothari and Rajiv Bhartari from a Delhi college, would think it fit to share their field trip findings (July-August 1983) that aimed to understand “the likely environmental impact of the massive hydel and irrigation complex” and document “existing natural and cultural facets of the river” (June 2, 1984).

However, the timeframe that the editors of this volume work with – with apology for not being able to include some fair lengthy papers – takes up the year 1990 as the starting point of the journey. From a very voluminous inventory, they now needed to pick up seminal papers and they ended up spreading their selection along five broad themes: water resource development and management, historical perspectives, social and political dimensions, economic concerns and water policy.

The book does begin with the most controversial of the large dams in India, Sardar Sarovar, and has three papers on it. The first one is a seminal paper by Baba Amte. This paper was preceded by a small booklet titled, ‘Cry O Beloved Narmada’, which was published from Warora in July 1989, and presents a comprehensive critique of the Narmada valley project and offers alternatives. 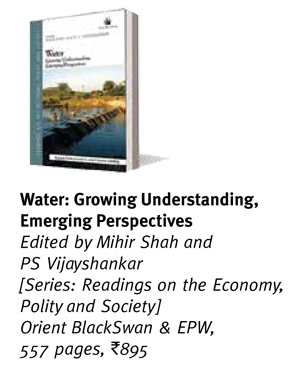 Similarly, the second paper by Suhas Paranjape and KJ Joy is from that 2006 moment (before the dam height was raised from 110 metres to 121.92 metres), when these two authors reiterated their proposal for re-structuring the Sardar Sarovar Project (SSP), which was first published as a book, Sustainable Technology: Making Sardar Sarovar Project Viable. The editors identify this alternative as “an isolated instance of the spirit of compromise, showing a possible way forward for river valley planning in India”. It would have helped readers a great deal if the editors would have told us what they think of the response to this alternative proposal from the proponents and detractors of SSP, for the response from Narmada Bachao Andolan did raise certain pertinent questions even on this proposal.

The third paper in the section of large dams talks about what was the situation in the Narmada command area, where the rhetoric of participatory irrigation management (PIM) turned out to be a mere lip service and even as the waters started flowing through the main canal, there existed an ‘institutional vacuum’. While the fourth paper looks at “various options for promoting irrigation privatization in India”, the fifth one presents a critical evaluation of “the failure of irrigation bureaucracy in last-mile delivery”. Failures of irrigation bureaucracy has been talked about right from the mid-70s in those relatively invisible performance audits of medium and major irrigation projects by the comptroller and auditor general (CAG) of India. In 2003, being a new entrant to studying water resource management, who had started to engage with CAG audit reports, I had written an article that voiced ‘command area ecological concerns’ and argued by citing CAG audit reports that command area development authority (CADA) model had failed in Gujarat irrigation commands such as Ukai. This was misread by Talati and Shah (2004) as “harking back to the philosophy of command area development programmes”, while I was finding that with increasing frequency, CAG audit reports were showing in performance audits how CADAs had failed to deliver!

The latter part of the first section deals with papers discussing the role of groundwater and the editors identify Bela Bhatia’s 1992 paper, ‘Lush Fields and Parched Throats: Political Economy of Groundwater in Gujarat’ as “the earliest rigorous field evidence” of groundwater depletion. While the editors acknowledge the role of economist BD Dhawan and his prolific writings on groundwater, they argue that “Dhawan’s work does not find a place in our collection as his understanding on the subject has been superseded by later work and the debates which he was part of have become dated and lost relevance in a significantly altered context”. I was curious and expected that the editors would argue out their case, but they quickly move to provide introduction to the selected papers.

Overall, the editors of this book walk us through the archives of EPW and bring to us 29 papers from scholars from different disciplines and perspectives that collectively contribute to our growing understanding on water resources.

Upadhyaya is an assistant professor at Azim Premji University, Bengaluru