Footpath of hope and despair

The lanes near the Tata Memorial Hospital in Mumbai sees numerous cancer patients and their families in hope and despair as they make home on spread-out newspapers and plastic sheets on the footpath. Rajnikant Giri is just 21 and has cancer on his foot. A native of Bihar, he first went to Delhi for treatment; but he was advised to go to Tata Memorial. For the past four months he has been living on the footpath and will spend one more month here before he leaves for his home. He has undergone chemotherapy and has incurred `50,000 out-of-pocket expenses. (Photos: Geetanjali Minhas)

As you walk through the lanes near the Tata Memorial Hospital in Mumbai, you can see hope and despair living in the same place. With ID cards listing their case numbers hanging around their necks, numerous cancer patients and their family members lie down on spread-out newspapers and plastic sheets on the footpath. After spending thousands on treatment in their home states they have finally come to the country’s largest tertiary care facility, clinging on to their only hope. The hospital treats around 6 lakh patients a year and offers cure at subsidised rates, which is still out of reach for many. To cut down on their expenses on a room in the hospital and save money on commuting for follow-ups patients make a beeline on the footpath – their makeshift home. Their bare minimum possessions stuffed inside plastic bags and cardboard boxes are littered all over. Many have exhausted their savings on the treatment and are worrying about funding the cure. Here are a few glimpses of their life. 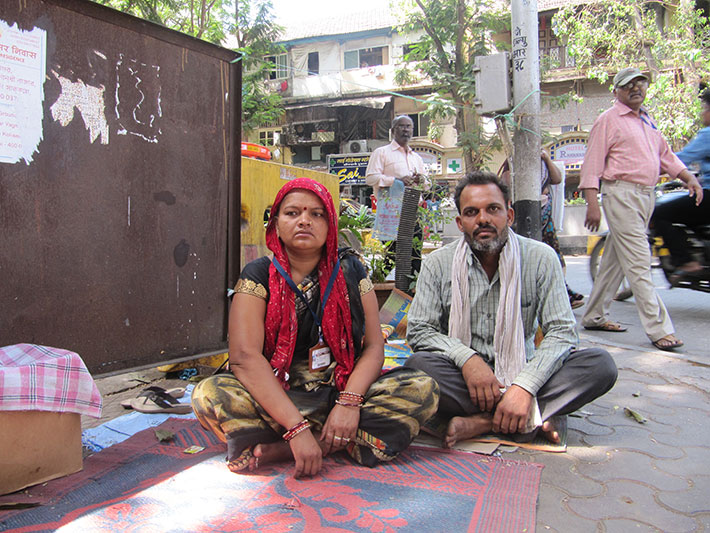 Rekha Pandey, 35, is suffering from uterus cancer. Along with her husband, Kailash Pandey, she came to Tata Memorial, “the best for cancer treatment”, on March 12. The couple hails from Chhatarpur in Madhya Pradesh. Rekha is undergoing chemotherapy and the couple has made the footpath their home for four months; there is no dharamshala nearby. Most of her tests are conducted in the hospital, but she is advised to get some tests done from a private clinic.

Renu Devi’s treatment for liver cancer started at Tata Memorial in February. The 55-year-old has spent '27,000 as out-of-pocket expenses so far. She has made the footpath her makeshift home as the hospital only provides her treatment, not accomodation.

For the past two months, the footpath has been Mahabub Ali’s home. The 66-year-old farmer from West Bengal has liver cancer. The security staff at the hospital constantly chase him off from the footpath. He needs '1,20,000 more to have a stent placed in his intestines. He has an AB-PMJAY card, entitling him to care, but that does not cover his test expenses.

Sabina Khatoon, 40, was diagnosed with liver cancer three years ago. She stays in Malad in Mumbai but has shifted to the footpath to save time and money on her long commute. She has been advised to undergo chemotherapy. 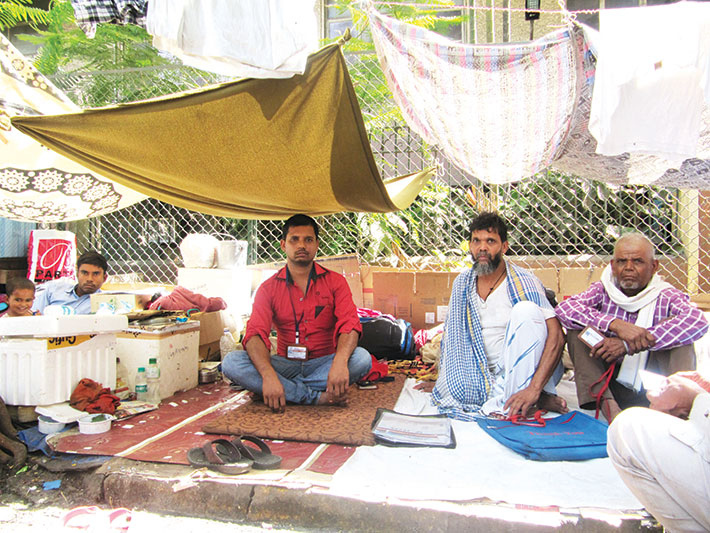 In October 2017, 33-year-old Mohammad Tahir Ali came to Mumbai from Malda in West Bengal for the treatment of brain cancer. The disease has now spread to his eyes and mouth. He used to stay in a nearby mosque earlier, but was told to leave due to his Bengali origins. He had shifted to a lodge later but increasing expenses forced him and his family to reside on the footpath. His family had to sell their village land to gather money for an emergency operation. They have even taken a Bandhan loan of '80,000. So far Ali has incurred a cost of '2 lakh on his treatment. He needs plastic surgery now, which will cost '50,000. 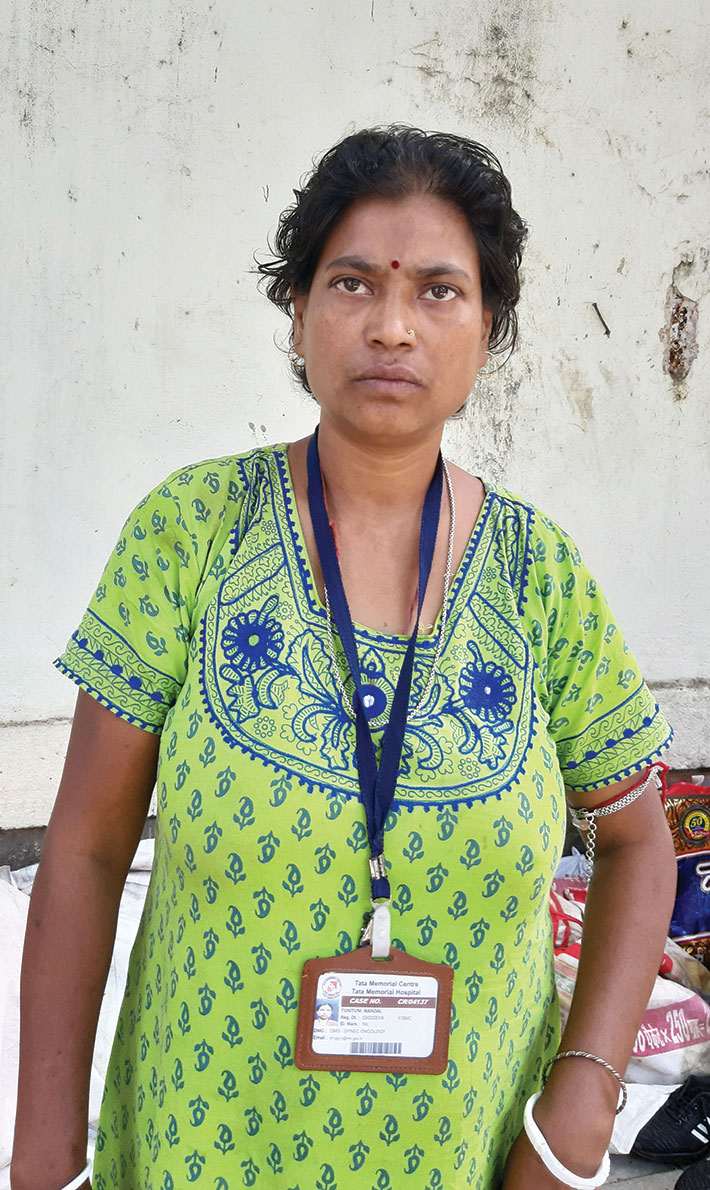 Tuntuni Mandal from West Bengal first received chemotherapy and radiation therapy in 2018. The 39-year-old suffers from stomach cancer. She has come to the hospital for a follow-up and has decided to take refuge on the footpath. So far she has paid '1.5 lakh in out-of-pocket expenses for her treatment. 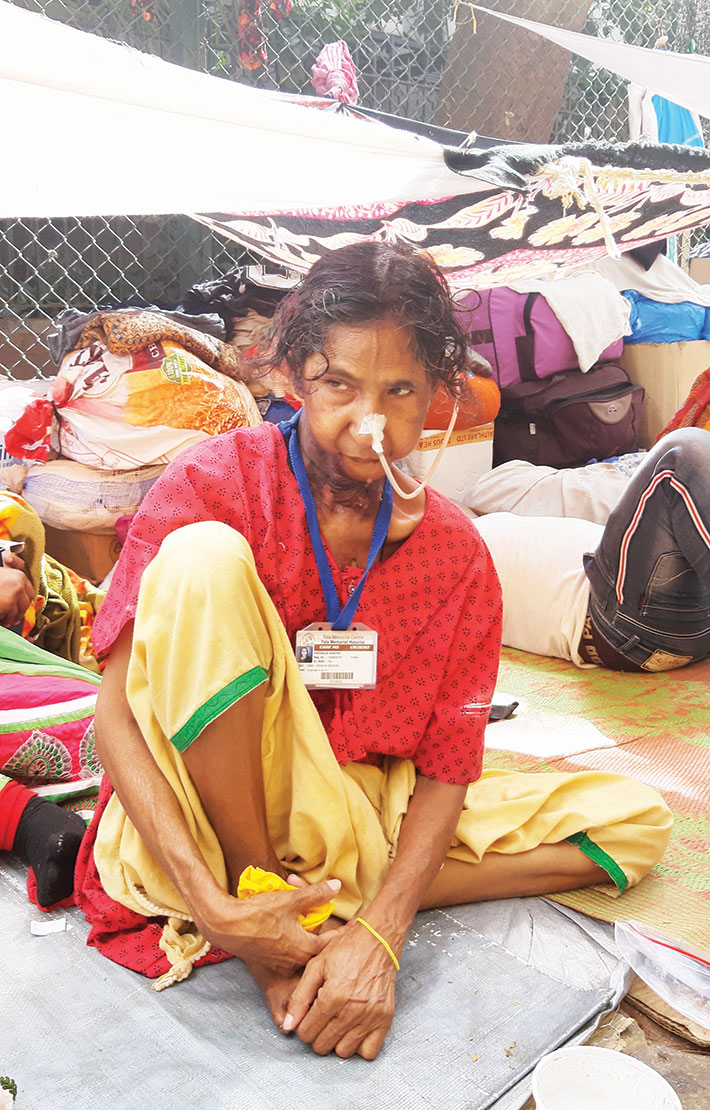 Hutaja Khatoon, 48, is from Bihar. She suffers from chin cancer and has been undergoing radiation therapy for five months. Her son and daughter live with her on the footpath. Till now they have spent some '2 lakh as out-of-pocket expenses. “Every day charities and even individual donate food, water, toiletries and even money to us,” says Shabnam, her daughter.