A lot has changed in the 21st century. The battle to empower women, to make them stand on a level ground with men is a goal which all of us today don’t see as far-fetched. People have been achieving this equality in their own unique ways. It may start as early as teenage, with girls competing with boys in academics and sports to higher enrolment of girls in universities and offices. With social reform movements in India, like breaking the 400-year-old tradition that bans women from entering a temple and Muslim women contesting triple talaq, attitudes towards women are changing.

While feminism may seem becoming redundant in future, going by my idea of gender equality the scene still remains skewed. I started working right after I graduated from college. I followed the footsteps of my two elder sisters who were both successful in their respective fields of work. It was not until their marriage that their professional life had to take a break. Accepting the role change as the fate of being a girl, they are moving on to build their family lives. The logic behind their act was never questioned.
Iris Bohnet, a behavioural economist, terms this as “unconscious bias” of a society. She says that “bias is built into our practices and procedures, not just our minds. We constantly make inferences based on bias.” Bohnet, a professor of public policy at Harvard Kennedy School, demonstrates this bias in modern day context in What Works: gender equality by design.
The book proposes systemic interventions to tackle gender inequality by focusing on de-biasing environments and organisations rather than individuals. Our biases are so ingrained that de-biasing people’s minds is difficult and expensive, and diversity training programmes have limited success. Bohnet says that American companies spend about eight billion dollars a year on diversity training, but much of that is wasted. The environment too sometimes does not support such interventions and people tend to succumb to their biases. “If you are going to ask people to stop making decisions the way they do, you have to offer an alternative. The book’s goal is to offer good designs; designs that make it easier for our biased minds to get things right.” Through this book, Bohnet gives “tools needed in classrooms and boardrooms, in hiring and promotion, benefitting businesses and governments”.
She introduces the concept of behavioural design by highlighting the value of including women in the labour force to improve the countries’ productivity, income and economic growth. Bohnet gives the example of Japan – that if gender parity is achieved in labour force, its gross domestic product (GDP) would increase by 20 percent.
The book also suggests that “for an increasing number of countries, the talent argument has gained importance as the gender gap in education has reversed and more women than men graduate from college”. In India, for instance, according to the report of the working group on employment, planning and policy for the twelfth five-year plan of the erstwhile planning commission, 104.5 million women in rural areas and 22.8 million in urban areas were in the workforce in 2009-10. There was a decline in women workforce vis-à-vis 2004-05 when 124 million rural and 24.6 million urban women were working. The NSS 66th round indicated that an estimated 84.79 million women in rural areas and 33.88 million women in urban areas were neither working nor available for work as they attended educational institutions in 2009-10. 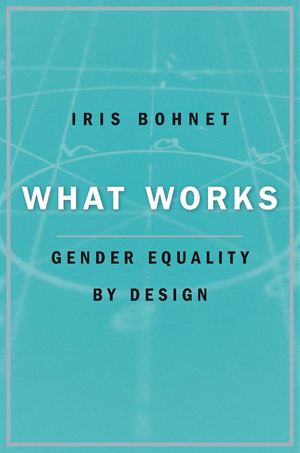 Bohnet says that training designed to raise awareness about gender and race inequality may end up making gender and race more salient and thereby actually highlight differences. She asks us to “lean in”, adopt a “consider-the-opposite-approach” (imagining oneself in another’s shoes), imagine a “crowd-within” (asking themselves how a crowd would assess evidence) or be “more deliberative” in seeing diversity issues. She suggests de-biasing techniques provided by Babcock and Loewenstein. They show the effectiveness of TV programmes like Satyamev Jayate, hosted by a Bollywood movie star, in reducing implicit bias of students towards lower castes, making them infer that “emotionally charged nature of narrations was an important element in reduction in prejudice levels”.
Many judgements and decisions happen without active thought. For instance, the recruitment process is full of bias and unintentional misguidance, according to Bohnet. She guides the reader through the numerous pitfalls present throughout the process. The messages on job ads, newsletters and web pages, sent to potential applicants, with subtly gendered language influencing individuals’ perceptions of their belonging in the workplace, question their suitability for the role. This can be avoided by careful scrutiny of the content and its context. The reader then gets a systematic interview checklist that would serve as a guide for many organisations who seek to fairly recruit and get the biggest talent pool possible. “Electronic” screens and anonymisation can also be used for interview and management in organisations, she suggests.
Behavioural design hence can foster an environment in which our acts do not reflect bias. Another such design method for gender inclusion is the ability of role models in promoting the moral imperative of gender equality. Bohnet gives the example of Panchayati Raj Act in India, which was able to increase the share of women in the local government from 5 percent in 1993 to 40 percent by 2005, exceeding the mandated quota of 33 percent. Women leaders provided key public goods and accepted fewer bribes than their male counterparts. She says, “Being exposed to at least two female chiefs in West Bengal overcomes their initial bias against women as leaders. Introduction of political gender quotas in India was a success. The act of seeing women lead increased women’s self-confidence and their willingness to compete in male-dominated domains.” The idea of an effective leader changed.
With ‘D’ for data, ‘E’ for experiment and “SIGN” for signpost, Bohnet concludes by breaking ‘DESIGN’ down into three helpful steps for good behavioural design. She tells us to begin by collecting data to understand whether there is gender inequality in our particular organisation, like the number of women hired or promoted, then to experiment with what might close gender gaps, and finally, informed by behavioural insights, to create signposts that nudge behaviour towards equality.
The tactics presented in the book gives way to reorient behaviour as opposed to moral licensing. For me, proofs against such beliefs and freedom from gender bias starts at home. It is our knowing disparity between a brother and sister, mother and father, that we see and learn as children that shape our stereotypes and continue in our classrooms, profession and leadership and hence shape society or community mindsets. It is this “unconscious bias” which needs to be dealt with from its very root.
Bohnet shows that today gender still matters and that stereotypes are developed unknowingly, is true, but her nudging and behavioural design methodologies seem like trick affairs for tackling gender inequality. While training programmes may have limited success, her idea of changing environments of institutions rather than devising methods to alter way of thinking altogether seems like a way out. She quotes economists Paul Milgrom and John Roberts in the book, saying that “even if the beliefs are completely groundless, no disconfirming evidence ever is generated because women never get a chance to prove the beliefs are wrong. Thus, the baseless beliefs survive, and with them, the unjustified discrimination”. Bohnet’s book ends with the need for action, action that begins “the quest to design gender equality to a fair and better world today”.
What Works is an out-of-the-box read. Full of facts, data and real-life evidence, it is a must read for those who want doable actions to ensure gender equality.
yoshika@governancenow.com