Indian PSUs: Is a metamorphosis possible?

As PSU awards come to a close, a look at what made some stand out against the rest BSNL was incurring '8,000 crore loss in 2014. But today it has earned an operating profit of '672 crore in just one and half years’ time,” proudly claimed IT minister Ravi Shankar Prasad, while addressing a ‘Vikas Parv’ function organised to mark the completion of two years of the Modi government.

Air India reported a profit of '105 crore in the last financial. Air India Express, the low-cost international operations subsidiary of Air India, also reported a profit of '362 crore in 2015-16 for the first time since 2005. The Indian Railways, however, continued on a losing streak with the dynamic passenger prices falling, as well as freight revenue growth not being encouraging.

PSUs over a period have evoked only extreme reactions. These range from global scale giants to tardy and wasteful entities that look anachronistic today. 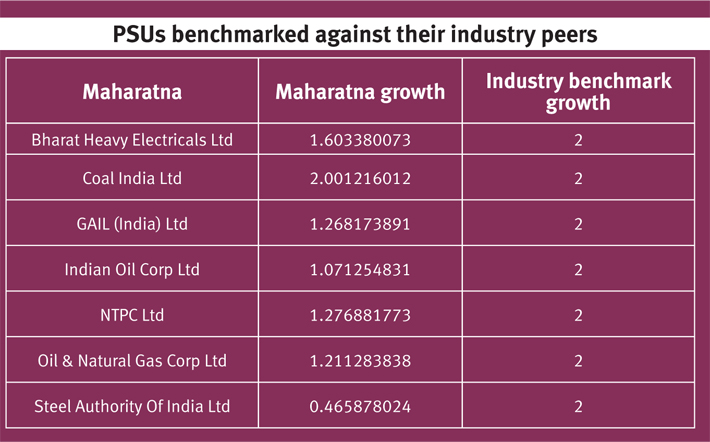 While numerous thought-provoking discussions have taken place including the usual stories of privatisation of PSUs, the word ‘unlocking the potential of PSUs’ will be best understood only when we accept and ensure that the rationale for their existence and their core goal is cast in stone and every other thought revolves around it.

PSUs are more than business entities, though they seek to be run like one, at least in the financial perspective. Often, their core objective includes looking beyond immediate and short-term profitability and includes areas where national control and pride are associated. They are meant to be the driver of change across the country, besides a channel to deliver the benefits envisaged by the government for its people.

At the outset, PSUs are sought to be created where capital investments are huge and products and services are to reach across the geography and demographics and ensure basic essential services like food, water, electricity, healthcare, education, communication, transportation and banking.
However, in the long run, they need to build sustainability for themselves as well as ensure that they do not lag behind in technology adoption, human resources management and other green initiatives that eventually position them for leadership in the future. The financial and the non-financial metrics eventually provide an indicator of how well-equipped the PSU is in the future to take care of its growth. 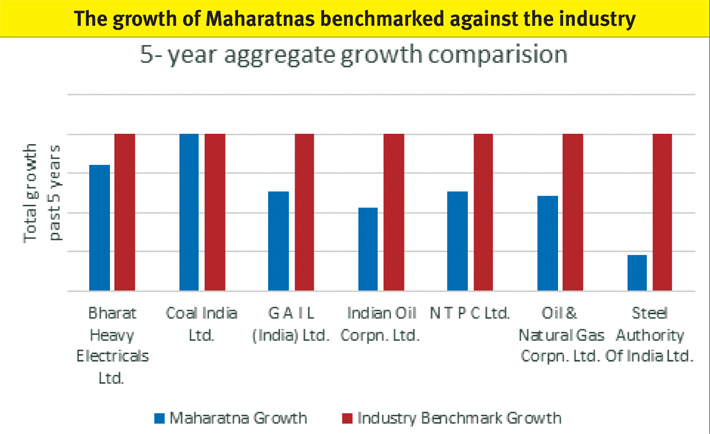 Could benefits of legacy finally be lost?

The breakdown of old monopolies will lead to different pricing models and innovative management of cost, something that the PSUs need to manage the burden of legacy. Some companies that have currently emerged as winners, have an oligopolistic or monopolistic nature to their business, and are highly asset-intensive. The relative monopoly of Coal India thus earns it good financial metrics, but when it comes to an overall metric, this monopolistic situation might change soon in the coming year. In 2014, the government amended the mining policy, and made necessary changes to allow private players into the commercial sale of coal. This could be the first precursor towards privatisation of the coal mining industry. Therefore, going forward from here, it may not be possible always for Coal India to improve its performance. The primary driver of the performance of Coal India is the asset utilisation, which is a combination of PAT/assets and total income/assets. Both of them would be under pressure if an increasing number of private players come into play in different parts of the value chain of coal mining.

In case the monopoly of Coal India is challenged, it could make way for NTPC or ONGC, which perform well on other non-financials as well. ONGC, for example, performs well on a lot of other parameters that are softer in nature, such as ICT, environmental sustainability, HR and CSR that ensure growth is balanced as well as structured to take on future challenges. This is seen in the score for the overall Maharatna. Best performance, in which ONGC tops the charts. This is largely because ONGC tops the charts in various non-financial sections such as ICT, environmental sustainability, HR and CSR.

That asset utilisation (an example of legacy) is one of the key drivers of the entire score is reflected in another contrasting metric, which is consistent growth and adaptation, which when benchmarked against industry as a whole conveys the picture where PSUs could be lagging.

The scores on consistent growth and adaption of various PSUs, when benchmarked against industry average and normalised on a score of zero to two, show a grim picture where all Maharatna’s are lagging behind their regular industry peers.

The Navratnas, while showing similar lagging trends in growth and consistent adaptation, showed much better strategic performance and employee productivity, which should spark a debate on whether Navratnas should be given a leg up to take more big ticket investment decisions. If, with a little leg-up in strategic investments, the Navratnas could improve on asset utilisation and employee productivity, and strategic performance, then in the medium run they could almost rival their private sector peers, as they would then drive consistent growth as well. Overall, they seem to show much more agility than the Maharatnas. Clearly, strategic investments hold the key to a runaway future of PSUs.

Overall, as far as all the PSUs are concerned there are just 30% PSUs that have a score of above 100 for strategic investments. As far as maintaining growth is concerned only about 15% are near the industry benchmarks, while the rest are below.

Niche and innovation are the keys

One of the new entrants to the list is Numaligarh Refinery. The refinery (of the Miniratna 1 category) tops in strategic performance and asset utilisation. It shows the way to many PSUs in terms of what they could achieve from innovating to market needs. Numaligarh Refinery recently added a slew of new products to its basket, like special boiling point spirit (SBPS) and mineral turpentine oil (MTO). In strategic performance, it scores way beyond its peers, which is reflected in its launch of new products to fit the market. It is the only refinery in the northeast producing specialised products that are used in paints and varnishes.

In this category we see a lot of sunrise companies which are invested into niche areas that show promising performance in key parameters such as asset utilisation and relative growth and adaptation. For example, the Handicraft and Handlooms Export Corporation of India shows a promising performance in asset utilisation, while Bharat Immunologicals and Biologicals Corporation Limited (BIBCOL) in relative growth and adaptation – a category where most PSUs have not performed well. This has been possible because of their focus on innovation. The company has many firsts to its credit. It has been the first to provide alternate therapy for diarrhea treatment, dispersible iron folic acid tablets, vitamin and mineral mixtures and other healthcare products developed through in-house R&D.

Niche-based innovation, along with a focus on core strengths, can undo the burden of legacy for many PSUs. One of the popular theories for the existence of PSUs has been that they should be able to offer products at a price and quality that will often force the private sector competitors to offer products at those prices, or certainly benchmark in service/product delivery that profiteering often would not be able to deliver. BIBCOL is a case in point.

The findings have several implications for how PSUs should plan their journey and how even their self-evaluation should be nuanced. Procedural and structural reforms can help them being more effective and not just efficient. Given the fact that they have a larger mandate of developing not just themselves but also their surrounding ecosystem, they also have to be measured by not just the value added per person of their employee, but also the ancillary employment they create in the ecosystem around themselves.

They also have some unique strength in being able to give back to society. Because they often serve diverse geographies, they can, through their CSR infrastructure, offer much more back to society in terms of health and education.

Like the bureaucracy was once called the steel frame of India, PSUs can still be the bulwark of India’s state-sponsored, mission focussed technology incubators and hard wires of its infrastructure. Modern management techniques with a niche focus will still have them deliver the goods of a private sector company with a lot of social and societal goodwill. They are like the MTNL phone line, which we still prefer to have in our households, at least one if not all. A little metamorphosis and then they can still morph the nation! n

Mrug, founder and CEO of M76 Analytics, oversaw the Governance Now PSU Awards 2016 evaluation and was a jury member