Prof Naela Quadri Baloch landed in New Delhi in April. Her mission was to canvass support of the Narendra Modi government for the independent Balochistan movement. Naela used to teach pharmacy in the University of Balochistan, Quetta – till that day in 2010 when she learnt that the Pakistan army was planning to kill her family in Quetta in a bomb attack, the way it had killed one of the most respected Baloch leaders, Nawab Akbar Bugti, in 2006. Overnight Naela, her filmmaker husband, Mir Ghulam Mustafa Raisani, and children crossed the border and moved to Afghanistan. The family took shelter with the United Nations High Commissioner for Refugees (UNHCR) and later moved to the West where they were received as political asylum seekers.

Baloch movement leaders, many of whom are expatriates, likened Naela’s visit to a historic liaison between Baloch leader Mir Ghus Bax Bizenjo and India’s first prime minister Jawaharlal Nehru in 1947. Soon after partition, Bax had come to know that the newly created Pakistan was planning to annex Balochistan, and he had rushed his emissary to seek India’s help. Nehru, however, had refused point blank.
“It was after 70 years that a Baloch leader was approaching India with a similar request,” says a Baloch activist who is privy to the details of Naela’s visit. She interacted with the think tanks close to the government, met authorities in government and political parties, and travelled to many state capitals where she briefed political leaders and the media. Before her departure, Naela had said that the Indian government perhaps lacked political will to speak up for the people of Balochistan. 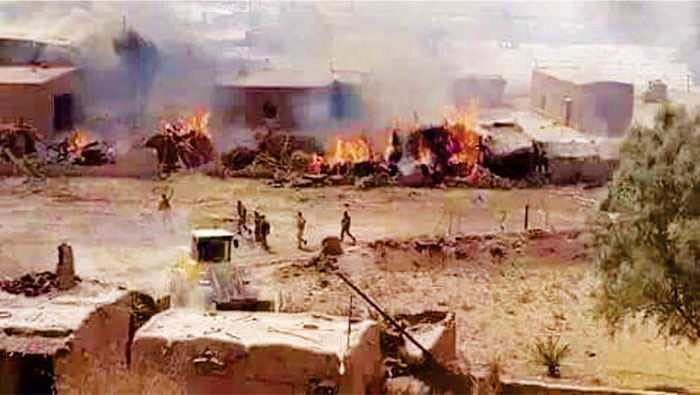 A Baloch village allegedly ravaged by the Pakistani army 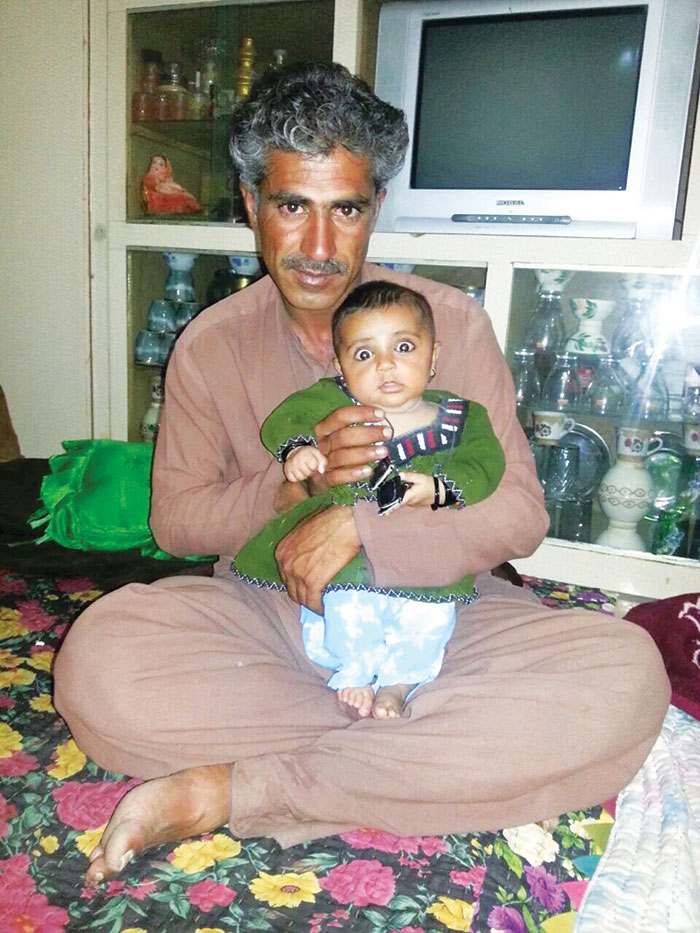 Hasil, a resident of Awaran, [holding his daughter in this pic], was picked up by the army on Aug 22. His body was recovered two days later

“Pakistan had realised the strategic and economic importance of the region much earlier,” Bansal says on Islamabad’s plan. According to the Pakistan government’s website, 90 percent of the coal and gas from Balochistan is sent to the rest of Pakistan. The vast swathes of Balochistan have rich deposits of gold, copper, chromite, Barytes sulphur, marble, iron and high-quality onyx, and these parts have been given to Chinese firms for exploration and mining. In fact, the common name for LPG or cooking gas across Pakistan is ‘Sui gas’, after the place of its origin in Balochistan.
Bugti, who was killed in a blast carried out by the army in a cave where he was hiding with his guards, was fighting against the “loot” of the region’s natural resources by Pakistan with the Chinese help. China has invested $46 billion in building the Gwadar port on the Balochistan coast which gives Beijing access to the Arabian sea. However, a hostile Baloch and Pashtun population has made sure that the highway – China-Pakistan Economic Corridor (CPEC) – running through their territories – Balochistan, Khyber Pakhtunkhawa and Federally Administered Tribal Areas (FATA) – cannot be used. The CPEC is an ambitious project to give China access to the seas right from Kasgarh, an ancient trade centre and also bring economic prosperity to Pakistan.
Bansal says the brutalities unleashed by the Pakistan army in Balochistan can be judged from the fact that it uses incendiary bombs against the civilian population in violation of international conventions. “There are allegations of the use of chemical weapons as well but we haven’t got any concrete evidence so far.” He wonders how the world has chosen to ignore this.
The alienation of people of Balochistan from Pakistan is complete. It is also a perfect case of gross human rights violations to be raised at the United Nations. “India is not supporting an independent Balochistan and thereby challenging territorial integrity of Pakistan, but it is tactically raising the issue of human rights the same way the US is doing,” says Bansal.
India’s game plan of keeping Pakistan on the defensive on Balochistan is also fraught with some implications for our bilateral relations. “Right now, Balochistan, which is 47 percent of Pakistan’s land with just 5 percent population, lacks critical mass for breaking away into an independent state and therefore India cannot at the moment even think of creating a Bangladesh out of it,” says a senior government functionary.
Baloch leaders have limited expectations from India; they just want New Delhi to give pin pricks to Islamabad over human rights violations. They also want India’s help in expanding the campaign to other regions of Pakistan. “However, the geo-political situation in the region has changed. Once the US was propping up the Baloch leaders because it thought that an independent Balochistan would be a buffer for it in case Pakistan turned hostile or terrorists took over that country,” says Bansal. However, with the US resuming its relations with Iran, which, like Afghanistan, has a chunk of the original Balochistan territory, the American interest in Balochistan has come down.
India, he cautions, has to take care not to get involved in Balochistan to the level  of annoying Afghanistan and Iran. Significantly, after India, Bangladesh and Afghanistan have also supported the Baloch struggle. Is this the beginning of the process of Pakistan’s isolation in South Asia? However, given the huge Chinese stakes in Pakistan and Balochistan, it remains to be seen as to how Beijing  reacts if New Delhi goes too far in helping the Baloch movement.
aasha@governancenow.com


ALSO READ: Interview With Mir Mazdak Dilshad Baloch, activist for free Balochistan
“Now we know we can become the next Bangladesh”