The long road from Paraukh village

Ram Nath Kovind, the BJP’s presidential candidate, has his roots in a village near Kanpur. Governance Now visits his humble beginnings Ram Nath Kovind, whom the BJP has chosen as its candidate for India’s next president, was a prime dalit face of the party in Uttar Pradesh during the time of LK Advani and Atal Bihari Vajpayee. Indeed, it’s in central Uttar Pradesh – in Paraukh village, Derapur tehsil of Kanpur Dehat, to be precise – that his roots lie.

But his work, as a lawyer at the supreme court, was in Delhi, before he was made governor of Bihar. As a young man with a law degree, he had come to Delhi to prepare for the civil services exams, but finally chose a career in law, practising at the Delhi high court and then the supreme court. All along, he built himself up in politics, first serving as personal assistant to then prime minister Morarji Desai. After joining the BJP in 1991, he served as president of the party’s dalit morcha during 1999-2002, roughly the time when Modi was the party’s organisational general secretary. He contested twice in the Lok Sabha elections, from Ghatampur, a dalit-dominated area in Kanpur division, but lost; however, he served two terms as a Rajya Sabha MP from Uttar Pradesh. His connections to the RSS are well-known; in fact, the RJD in Bihar is unhappy with its partner, chief minister Nitish Kumar of the JD(U), on the issue of supporting Kovind precisely because of this.
Within his party, Kovind has often voiced the need for the BJP to shed its image as an upper-caste party. However, he takes a soft line on the issue, one that is of a colour with the RSS’s view-point, as a Wikileaks report of his conversation with a political officer of the US embassy has revealed. Though he does say that since Hinduism condones caste, it will take longer to eradicate it in India – at least 50 years, by his estimate – he is also of the opinion that only the BJP will succeed in doing good for the dalits.
Perhaps his views have to do with his background. Party chief Amit Shah may have described Kovind as “belonging to a poor family”, but relatives say his father Maikulal earned enough to provide for the needs of all his family members. Maikulal ran a kirana store in Paraukh and also dispensed ayurvedic medicines free of cost to everyone, regardless of caste. Besides, he was known to distribute textbooks and notebooks to school-going children. So Maikulal and his family were respected by all villagers. That the upper caste Thakurs and Brahmins of the village hold Kovind – who belongs to the Koli community – in high regard was evident when they felicitated him on his 2001 visit to the village, much before he became governor of Bihar (which was only two years ago).
In Paraukh, 76-year-old Pyarelal Kovind waits for the day his younger brother will be sworn in as president – he is sure his brother will win. Pyarelal’s son Deepak, a teacher in Jinjhak, left for Delhi on June 22 to extend his wishes to his uncle. “He gave us a call the day he was announced as the BJP’s candidate. He is humble and attached to his roots. His becoming president means something to him and for all of us. There’s a mood of celebration in Paurakh,” says Pyarelal. “I’ll go to see him being sworn in.”
Pyarelal had three elder brothers, two of whom died long ago; the brother immediately elder to him is an accountant in Delhi. “Ram Nath is the youngest and the brightest among us,” he says. He recalls the time he spent at the Raj Bhavan in Patna: he was in Patna for knee treatment and stayed as his brother’s guest. “He made us see all of Bihar,” says Hemlata, Pyarelal’s daughter.
Kovind married in 1974, and his wife Savita, who was a BSNL employee, is now a homemaker. The couple has a son Prashant and daughter Swati, both working with Air India. The son is married to Gauri, a Punjabi. The Kovinds’ family home in Jinjhak, 90 km from home, is a simple structure, sharing a wall with his brother’s house.
The surname ‘Kovind’ is Ram Nath’s creation. Says his brother Pyarelal, “I don’t know why he did so, but when he did that after entering politics, we too added it to our names.” 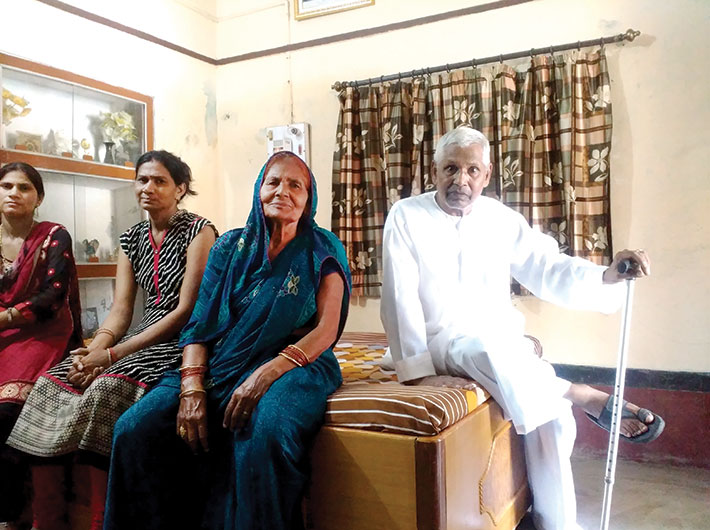 As a Rajya Sabha member for two terms, Kovind had the roads in the area improved. He had the ancestral home in Paraukh converted into a panchayat bhavan, where, besides administrative work, village weddings are organised. Did he organise favours for his family? “No,” says Pyarelal. “Itna bada kar diya naam parivar ka, ab aur kya chahiye? (He’s brought such a great name to the family, what more can we ask for?)”

Pyarelal says other than Kovind, no one in the family has been associated with the RSS or the BJP so far; however, his son Deepak now wants to do so, in order to follow up on what Kovind has  done so far. “Ab kisi ko Kovindji ka kaam aage badhana hi hai,” as he puts it.
Vidyawati, Kovind’s sister-in-law, who brought him up after his mother died when he was just five, shared some stories of his childhood. “He used to steal ‘patti’ (a kind of chikki) from his father’s grocery shop. To ensure no one could catch him, he used to dip it in water so that it softened and didn’t make a noise when he chewed on it.”
In Kanpur city, where Kovind has a house in the Indiranagar locality, there aren’t many people who remember him, since he moved out soon after completing his studies. Says SP Singh, a social activist and professor of history at Kanpur’s Christ Church College, “There is no doubt Kovind’s candidature will help BJP to win the hearts of dalits. The decision will put Nitish Kumar and Mayawati in a fix, because they will find it difficult to oppose a dalit. But frankly, I don’t know who Kovind is (except that he’s the Bihar governor) despite being born here,” he says. He means that few people had heard of Kovind before he was made a presidential candidate.
“It’s only now I came to know he has a Kanpur connection,” says AS Mishra, 59, a lawyer who practises in the Kan-pur courts. “Even after being two-time MP and what not, he hasn’t given any-thing to the city.”
Neighbours say that he is a calm and soft-spoken person. They recall he studied in a government school in Khanpur village (under Sandalpur block of Kan-pur) and then completed his Std XII from an RSS-run school, the BNSD Shiksha Niketan. Then, he went on to graduate and finish his law degree from the DAV College of Kanpur.
Kusuma Rathore, the caretaker of his Kanpur house, says he is a rare visitor to Kanpur these days. “Babu-ji comes here only when there is an event he has to attend, even then, he comes here only for a few hours.”
If elected, which he is likely to be, he will be India’s second dalit president, after KR Narayanan. The election will be held on July 17, and votes will be counted on July 20.
ishita@governancenow.com
(The article appears in the July 1-15, 2017 issue of Governance Now)