Getting detailed with river water Long-time residents of Varanasi say that among their fondest memories is of sitting on the ghats and watching dolphins frolick in the Ganga. These days though, no one sees them. “Some 25-30 years ago, dolphins were a common sight here at Assi ghat,” says Ram Kishan Nishad, a boatman. “Now, they have moved towards Chunar (upstream from Varanasi).”

And Kavita Shah, the dean and head professor at the Institute of Environment and Sustainable Development (IESD), Banaras Hindu University, says she remembers picking freshwater turtles and dropping them back into the river as a child. “Even the clams are hardly to be seen,” she says.
For all the talk of cleaning up, the true indicators of the health of a river as mighty as the Ganga, once a thriving ecosystem rich in biodiversity, are missing. To understand one of the chief reasons for that, you needn’t go far. Varanasi, as is well known, is named after two tributaries of the Ganga – the Varuna and the Assi – for the city grew around the place where they meet the Ganga. The Varuna still flows, dirty though it is, and joins the Ganga near the Varuna Sangam ghat. But the Assi is almost non-existent. People don’t even speak of it as a river. They call it the Assi naala, or drain. 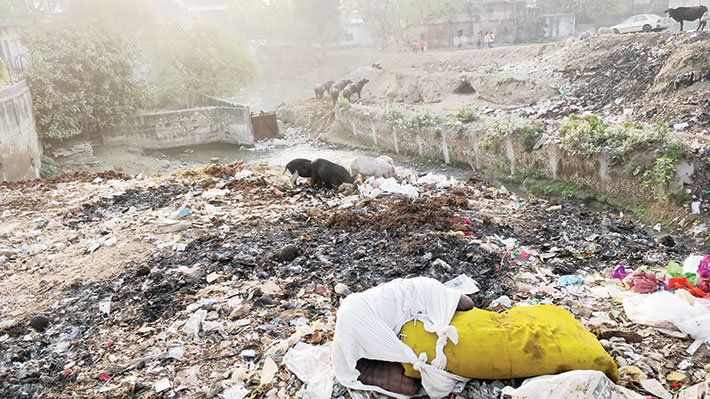 Says Nishad, “When I was a child, my family used to fetch water from the Varuna for drinking and cooking. It’s so dirty now, no one will even put his hands into it. Both the nallas (Varuna and Assi) are dirtying up the Ganga. Once, when Rajiv Gandhi came visiting as the prime minister, they used chemicals to clean up the Varuna for him to see. They still do it when some important people come visiting.”
The Assi is an ugly sight. Near the main flyover crossing it lie heaps of garbage, domestic refuse, even the carcasses of dogs and other animals. The stench makes it impossible to stay there for long. Some of all that washes into the Ganga. The Varuna, which takes a winding course from its origin near Jhanghai, east of Phoolpur, is going the same way as the Assi. The city uses it as a drain to carry untreated sewage.
---
While much focus is being laid on keeping the Ganga clean under the Namami Gange mission, its tributaries are ignored. “The Ganga can never be cleaned properly unless its tributaries are cleaned,” says Shah. She cites biochemical oxygen demand (BOD) levels to emphasise her point. BOD is a measure of organic pollution, essentially material that uses up dissolved oxygen from the water for the decaying process and leaves aquatic life starved for oxygen. The lower the BOD (drinking water, for instance, has a BOD level of half a milligram or less per litre) the better the quality of water. State pollution control board data cites that in 2018, the average BOD level of the Varuna before it meets the Ganga was 36.9 mg/litre. Rivers are deemed unpolluted if they have BOD below 1 mg/litre and moderately polluted if the BOD is 2-8 mg/litre. In contrast, properly treated sewage has BOD of 20 mg/litre or less, and untreated sewage anywhere between 200 and 600 mg/litre.
Governance Now accompanied a team from the Tata Centre for Development (TCD) at the University of Chicago that has been working to develop open data on rivers and visits Varanasi every month or two. The journey starts at Assi ghat, near which, local experts point out, the source of Assi itself is no more than a narrow pit with colonies encroaching on both sides. 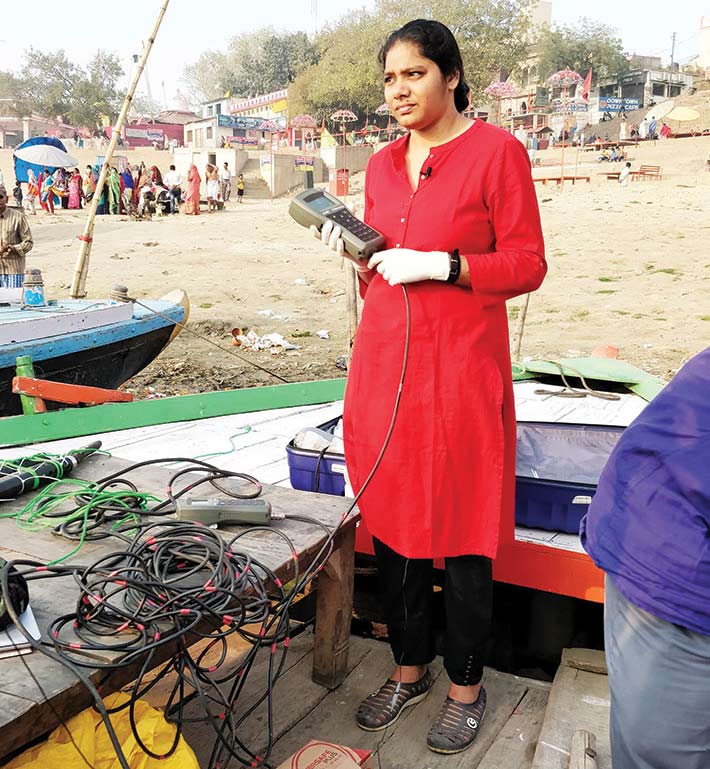 Ashu, a research associate with TCD, was monitoring the sensors collecting data. Before the journey begins, sensors are attached to the boat with the help of wooden rods. They stay immersed in the water, while wires connect them to digital meters that give readings. “Once the sensor is on, it’s good to go and does not need personal support. The boat takes a predefined route, and takes measurements every few metres. We then transfer the data to a laptop and upload it to our cloud-based network. Our programmes process the data and create heat maps,” says Priyank Hirani, team leader at the Water-to-Cloud Project of TCD. As soon as we reach the point where the Assi flows into the Ganga, the figures shoot up, indicating higher pollution levels.
Shah, whom we met later, elaborates: “Unless there is free flow of water in tributaries, pollution levels in rivers will remain high. Damming is another cause of river pollution. In the absence of natural flow, pollutants don’t get flushed out. Dams could be left open for a few months in summers and winters, and kept closed only during the monsoon to prevent flooding. Also, a lot of water goes into the canals for irrigation, but when the run-off returns to the rivers it’s laden with pesticides, urea, and other substances. These have to be flushed out.”

Another problem is that in India, there is a lot of untreated water from cities and towns flowing into rivers. Besides sewage, there is industrial effluent, most of it pumped in illegally and hence with no record of inflows. According to studies by the University of Chigago, almost 40 billion litres of waste water enters rivers and other water bodies in India daily. That’s about five hours of water flow down the Niagara falls, by a rough estimate (assuming 568,000 litres per second). As a result, 70 percent of surface water available in India is unfit for consumption. Much of the pollution leaks into ground water too. The economic and ecological costs are enormous.
Hence, it is essential to monitor rivers on a regular basis. But with river monitoring divided between the states and the centre, little gets done. For instance, in Uttar Pradesh, through which the Ganga flows, the state pollution control board monitors the major rivers, but while Varuna is monitored, the Assi isn’t. Where data is available, there is often disparity and inconsistency in terms of units used, location, time, day, depth etc. As Shah puts it, even a change in depth of one foot can make the data sets go awry.
Hence the need for open data on our rivers. The department of computer sciences at IIT, Banaras Hindu University (BHU) has partnered with TCD at the University of Chicago for the Water-to-Cloud project, and Shah, who is part of the team, says, “What we are trying to do is to put all the available data together so that it can be used in a meaningful way and create standards. We are also developing a Know Your Ganga app, and the data which we are collecting will go to this app along with the interpretation for the Varanasi stretch of Ganga (6.5 km). All the data we have in history are residing in books and used by few people for referring somewhere or the other. Now we are trying to create a consolidated picture of the whole thing of at least this 6.5 km stretch and assess something out of that.”
The data being collected is geotagged accurately, so that repeat readings are taken exactly at the same place. The sensors collect data for predefined parameters over the stretch at a various locations over the surface and up to two feet, and then the data from sensors go to the cloud. At the same time, the data are sent to independent third-party government certified labs for validation of the census and for few other parameters which cannot be taken directly from sensors, like faecal coliform and so on. The labs generally take a week to 10 days to validate the data collected by the team. All this is finally put on a dashboard, and not only is it open source, there are also visualisations in the form of heat maps, making it relevant and easy to understand, even for laypersons. Besides the Ganga, the team has also worked on pilot projects for the Godavari and  Yamuna.
Hirani says industrialisation and urbanisation play a major role in polluting the Ganga. Compared to Uttarakhand, there’s much more urbanisation and industrialisation in Uttar Pradesh, so data worsens; by the time the river reaches Bihar, the water quality begins to improve, but there is the problem of arsenic in ground water. Finally, when it reaches Kolkata, BOD worsens and faecal coliform matter increases.
For long, river data was available only with a few people and often in a form that was not actionable. The team is trying to change this by putting up data online, but also using mathematical modelling to make predictions, which will help long term planning. “From the governance perspective, that data can also be used to identify where unauthorised drains enter the river,” says Shah.
She says the ghats are definitely cleaner than they were during the previous regimes, but though awareness is spreading among people, it will take time before behavioural changes set in.
The NITI Aayog, in its strategy document for New India 2022-23, has said one of its objectivies is to ensure aviral (incessant) and nirmal (clear) flow in the Ganga and its tributaries. As a result of the Namami Gange scheme, launched in 2014-15, water quality has improved to a great extent in the Ganga. But only through monitoring – and intense, detailed monitoring, can the good work be sustained. The open data project is aimed at doing that.
“A river health programme is vital, and there are no protocols, guidelines and standards for river health assessment in India. There is a water monitoring protocol, and that’s how we have some safe drinking water. But river health is hardly monitored,” says Shah. “We are working towards that for the Ganga.”
Hopefully, it will be done for other rivers too.
praggya@governancenow.com
(This article appears in the May 15, 2019 edition)