The heat is rising

The grave crisis of climate change is not an election issue. It should be The day Amit Shah filed his election candidature papers from Gandhinagar, BJP workers were enthusiastic in preparing for a series of rallies in the constituency – but they had a complaint: the mercury was touching 39 degree Celsius. They arranged plastic chairs in a shade on the main road in Ghatlodia, the assembly segment of the constituency where the party president was to address voters. As volunteers made frequent trips to fetch water bottles, the talk centred not on corruption or nationalism but on weather. As Shah took the stage, suitably late in the afternoon, corruption, nationalism and other issues came back to the centre stage.
This is how the whole election campaign is playing out: At road-shows and door-to-door meetings campaigners and voters both complain about the nearly unbearable heat, while the political message focuses on everything but the weather.
Most parts of the country were witnessing mercury in the high thirties in early April itself. This was not the case earlier. Since 2004, when Atal Bihari Vajpayee decided to go for elections earlier than the scheduled September, this is the fourth Lok Sabha election taking place in summer. Veteran political workers and reporters would recall sweating it out during national and state elections in previous decades, but in recent years it’s significantly hotter.

Looking back: What BJP promised in 2014 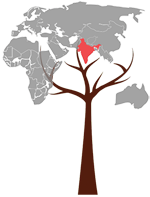 The World Meteorological Organisation, in its March 29 statement on the State of Global Climate 2018, notes that 2015-18 were the four warmest years in recorded history. This year, a scorching summer is promised for the thousands of candidates and their entourages. Skymet Weather, in its monsoon forecast released on April 3, predicted “a rising trend in temperatures in April”, and “its continuation in May is likely to pave way for intense heat before the onset of Monsoon”.
Notwithstanding variations from place to place and year to year, this is the well known and well documented phenomenon of global warming, and the accompanying climate change. Curiously, it is altogether missing from the election discourse even as the candidates and voters debate a sundry other issues. The biggest democracy on earth, nearly a fifth of humanity, is collectively drafting the agenda for the next five years and beyond, and it studiedly avoids naming what is possibly the greatest ever threat to the survival of human race.
To be fair, the election manifestos of the two leading parties do mention climate change, even if cursorily. In the BJP’s ‘sankalp patra’, prime minister Narendra Modi tells citizens in a two-page letter, “India’s stand on subjects like terrorism, climate change and prevention of money laundering are (sic) setting the global narrative.” Elsewhere, the manifesto mentions it once, listing the steps taken by the NDA government to promote alternative energy sources, along with the promise to continue efforts in this regard. 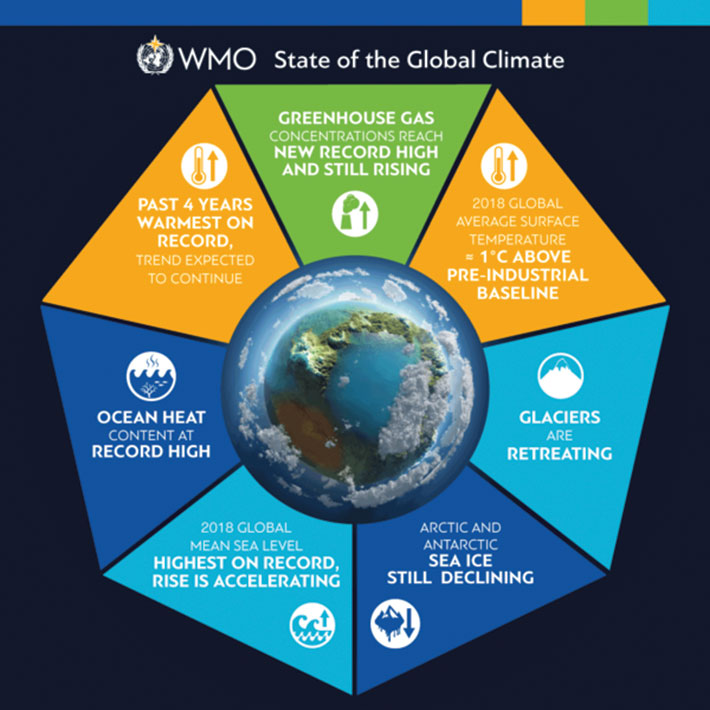 The Congress manifesto, on the other hand, devotes considerable space to ‘Environment and Climate Change’. It starts with the claim that it “was the first Indian political party to acknowledge the consequences of Climate Change”, followed by a cryptic parenthetical note: “Smt. Indira Gandhi in Stockholm on 14 June 1972”. The reference is to her speech at the UN Conference on Environment, in which she linked pollution to her pet theme of poverty, called for global cooperation, and quoted Atharva Veda. (See box for more on the manifestos.)
Manifestos are like wish lists; few expect all of the promises to come true. Their words remain in cold print, while the real hot-button factors are the ones that play out in the hustle and bustle of election rallies. In 2014, the BJP had, in promising ‘climate change mitigation initiatives’, pledged to set up a Himalayan Sustainability Fund. Not only the pledge has not been fulfilled, it is not even carried forward in the new manifesto. Beyond a written question in the Rajya Sabha, the pledge did not come up for scrutiny during the five years. Now, in its place the BJP promises to “ensure the Himalayan states are provided special financial assistance in the form of a ‘Green Bonus’ to facilitate the protection and promotion of forests in those states”.
The blame for the apathy towards the environmental crisis is certainly not on the political parties alone. If voters were getting worked up over some WhatsApp messages with shocking graphic details of air pollution in Delhi last winter or water queues in Shimla last summer, the BJP and Congress would scramble to outdo each other in promising clean air and enough water. AAP would be relaunched overnight as a green party. But environment has not been an emotive issue, neither in India nor elsewhere, not counting a few experiments in Europe.
The governments – politicians and bureaucrats – out of conviction or otherwise do take well intentioned measures in due course. Promotion of solar energy by the outgoing government is one example; push for subsidised cooking-gas cylinder distribution among the rural poor is another. But political leadership has the responsibility of creating awareness and making environment an emotive issue for voters, because what we are staring at is the threat of near-extinction within the next generation’s lifetime, if a majority of scientists and commentators are to be believed. 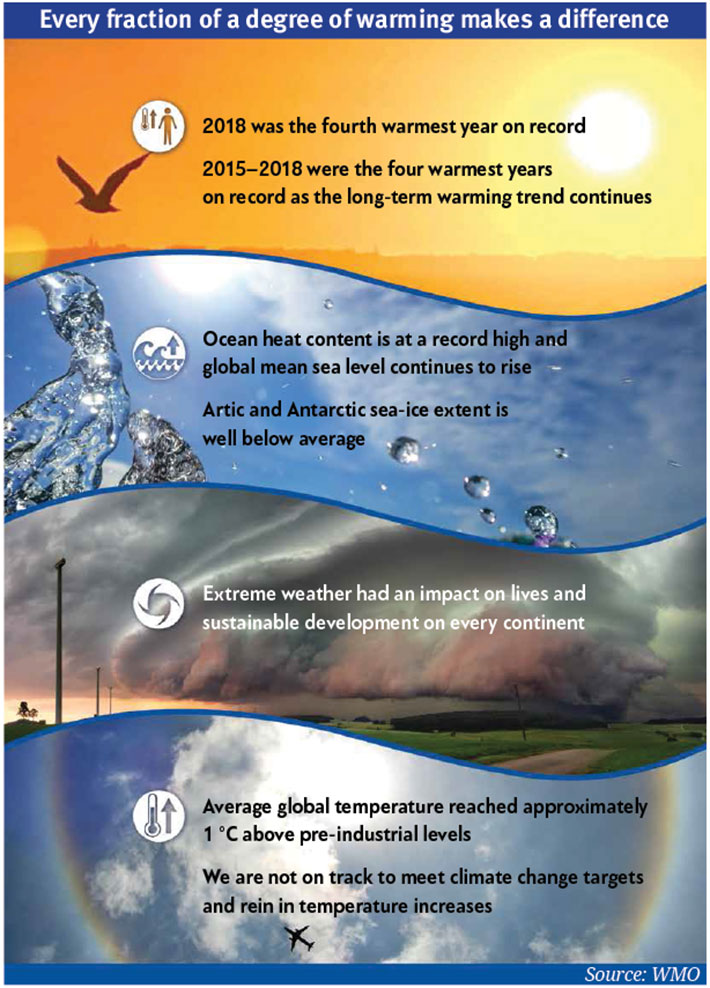 Some background is in order. Pollution began with industries, scientists maintain. Thus, climate change began with the beginning of industrialisation in the 18th century. Europe discovered technologies to exploit the carbon fossil fuel, and it literally changed the world – including its climate. Steam engines and electricity made life far easier, but left fumes and smoke in the atmosphere. Global temperatures have already risen by 1 degree Celsius since the start of the industrial revolution – much of it arguably in our lifetime itself. Glaciers are already melting, sea levels are already rising, heat waves are already increasing, freak weather phenomena and natural disasters are already more frequent. These are not matters of speculation  or debate anymore.
Optimists believe technology has always found solutions and we will find a way out of the terminal illness the earth is suffering from. But the time to find that solution is running out. There are some, Donald Trump among them, who believe the talk of ‘climate change’ is a conspiracy, but most scientists have given notice of the coming ‘sixth extinction’. The governments around the world have acknowledged the problem, but instead of joining hands for global solutions, each is busy passing the blame and playing diplomatic tricks to reduce the burden of mitigation on oneself. The latest in their efforts is the pledge they have made to try and restrict the rise in global temperature by the end of this century to 2 degrees above preindustrial levels (1850-1900). That would mean drastic cuts in consumption of fuels like petrol that the world has become addicted to. This would mean less economic growth.
If ‘climate change’ sounds too abstract to give us sleepless nights, we should consider some predictions that touch upon our lives. For this, there is so much of data and literature that a small forest must have been destroyed in printing them. But we can take The Uninhabitable Earth by New York-based journalist David Wallace-Wells as a representative work. Published in February, the book grew out of a long article for the New York magazine, and is based on a plethora of scientific papers and interviews with leading scientists working on climate matters. Here are some of the forecasts from the book – horrors likely to visit upon us provided concrete precautionary measures are not taken right now. 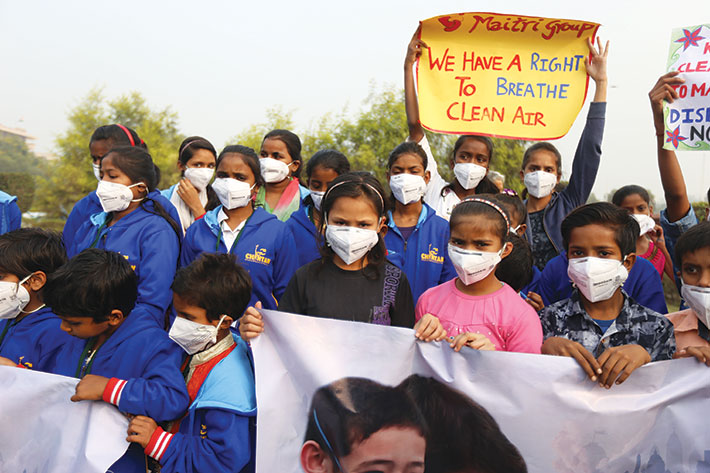 Wallace-Wells concludes from scientific research that even in the highly unlikely case of the 2-degree goal being achieved,
It is against this background that the general elections are taking place, and the parties and people are busy discussing castes and communities and freebies.
While the NDA government went into mission mode to increase India’s ranking on the World Bank index of ease of doing business, similar efforts are needed to improve the country’s rank on the Global Environmental Performance Index prepared by the Yale and Columbia universities, on which India was
placed 177th out of 180 countries last year.
The election season should have been the time to hold the outgoing government accountable for the diversion of funds, collected from the Clean Energy cess and meant for green projects. This should also be the time to debate the pros and cons of mammoth projects like the widening and expanding of the highways in the ecologically sensitive Garhwal region of Uttarakhand. Calling the river ‘Ma Ganga’ can make it an emotive issue, but the status of the Ganga rejuvenation programme is not one. So, it is understandable that no election rally would talk of the underachievement of renewable energy targets.
By the same token, Rahul Gandhi is not going to be challenged on Congress governments’ environmental mismanagement even after Indira Gandhi woke us all up to it in 1972 itself. The Congress needs to explain how it will square its promise of making India a manufacturing hub for the world, while also dreaming of putting India at “the forefront of the battle against global warming and for the protection of the environment”.
When the air is so polluted that breathing is called the new smoking, and the State of Global Air 2019 report says the lifespan of an average Indian is cut short by 1.5337 year, it is utter myopia if the elections are fought on identity politics. 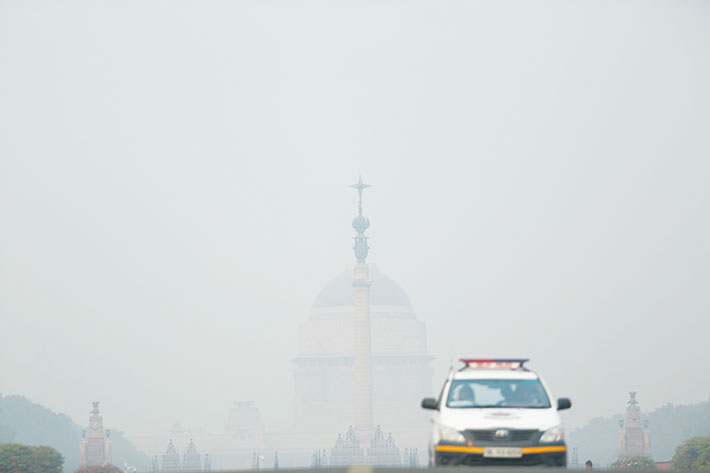 Less than a year ago, the NITI Aayog brought out a report on ‘Composite Water Resource Management’, giving dire predictions. “India is suffering from the worst water crisis in its history and millions of lives and livelihoods are under threat. Currently, 600 million Indians face high to extreme water stress and about two lakh people die every year due to inadequate access to safe water,” it said, adding, “The crisis is only going to get worse.” Moreover, “By 2030, the country’s water demand is projected to be twice the available supply, implying severe water scarcity for hundreds of millions of people and an eventual ~6% loss in the country’s GDP.” No wonder, in Ghatlodia, once Amit Shah’s assembly constituency, and other parts of Ahmedabad, the municipality supplies water for no more than half an hour a day.